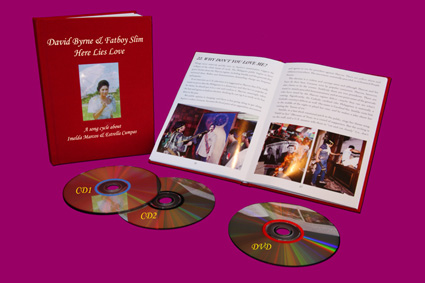 Quite the pleasant surprise to wind up in our inbox today, when a press release surfaced detailing the release of David  Byrne/Fatboy Slim’s upcoming concept album, “Here Lies Love“, about the life of about the life of the former First Lady of the Philippines, Imelda Marcos and her relationship with a servant from her childhood (Estrella Cumpas). It’s a massive album, one long in the making, primarily fueled by the forming Talking Head’s “passion for music and night clubs.” Wait till you hear the guest list though: Santigold, Tori Amos, Cyndi Lauper, Sharon Jones, Steve Earle, Florence Welch of Florence and the Machine, Shara Worden of My Brightest Diamond, Róisín Murphy, Nellie McKay, Kate Pierson of the B-52s and many, many more. The 24 track album will be released as a box set, featuring wo CDs, a 100-page book, and a DVD, by Nonesuch Records/Todomundo on February 23 of the upcoming year.

“The story I am interested in is about asking what drives a powerful person—what makes them tick? How do they make and then remake themselves? I thought to myself, wouldn’t it be great if—as this piece would be principally composed of clubby dance music—one could experience it in a club setting? Could one bring a ‘story’ and a kind of theater to the disco? Was that possible? If so, wouldn’t that be amazing!” (DB, from the introduction)