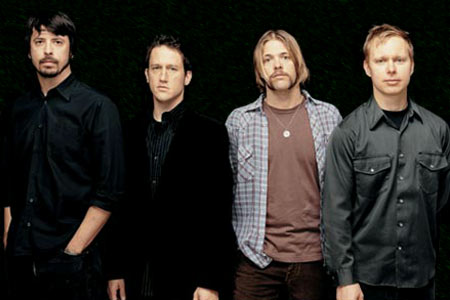 Dave Grohl, the [tag]Foo Fighters[/tag] charismatic frontman has finally shed some light on the upcoming sixth studio release, dubed “Echoes, Silence, Patience and Grace” and due September 25. It has always been my dream to mix Steely Dan with No Means No,” says Dave for Billboard of the eclectic sound of the Foo’s new album.

Last night 100 lucky people had the chance the listen to a few bran new tracks, from this new album, when the Foo’s performed live in London. The event was very secretive, no tape recorders, cameras, not even phones with cameras.

As a big Foo Fighters fan i can only be thrilled with anticipation, they haven’t let me down at any occasion and i bet the won’t with this one either.

“The Pretender”
“Let It Die”
“Erase Replace”
“Long Road to Ruin”
“Come Alive”
“Stranger Things Have Happened”
“Cheer Up Boys, Your Makeup Is Running”
“Summer’s End”
“The Ballad of the Beaconsfield Miners”
“Statues”
“But Honestly”
“Home”