Before starting the video at the bottom of the page just be sure that you are prepared for some true heavy metal music.

The teaser containing video scenes from the band’s latest live show, Epitaph, worl tour on 26th May 2012, at the Hammersmith Apollo in London, England, actually is for the band’s newest DVD with the same name as the worl tour. But there is more, according to their official website, the band is working at a new album. Asked about the new album release date, Halford answerd that:

I’m not really sure. It’ll be ready when it’s ready. We’re not under the same clock as we used to be. I remember in the ’80s we were banging out a record almost every year, and that was on top of putting in a world tour. We have the luxury now, if you want to call it that, of taking our time. And that’s just because that’s the way it is. We’re just as eager to get this done as ever, but we do it at a slower pace. It’s that British thing, you know? [laughs] It’s that monarchy thing. Let’s look forward to that moment for another PRIEST record for everyone to bang their heads to.

Here is the concert’s setlist: 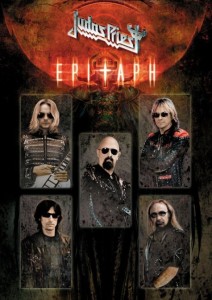 So, put on a leather jacket and start the video below. Enjoy!