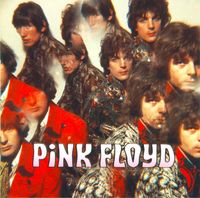 [tag]Pink Floyd[/tag]’s smashing debut album “The Piper At The Gates Of Dawn“, launched 40 years ago on August 5 1967, is set to be remastered and re-released as a 3 disc tribute special edition on August 28, of this year.

The packaging’s cover was designed Storm Thorgerson, resembling a cloth-covered book. Besides the 3 CDs the package contains a 12-page reproduction of Syd Barrett‘s notebook, a excellent idea as Syd used to devise some brilliant sketches and as he recently passed away, 1 year ago, it would be a good way to honor the man.

The first two, of the three CDs, will contain the actual full, digital remastered, Piper album in both stereo and mono, while the third contains bonus tracks, including the following: all the Pink Floyd singles from 1967, (“Arnold Layne”, “See Emily Play”, and “Apples And Oranges”), plus the B sides “Candy and a Currant Bun” and “Paint Box”. Other tracks are a version of “Interstellar Overdrive”, previously only available on an EP in France, as well as the 1967 stereo version of “Apples And Oranges”.

The tracklist, all songs written by Syd Barrett, expect those noted: