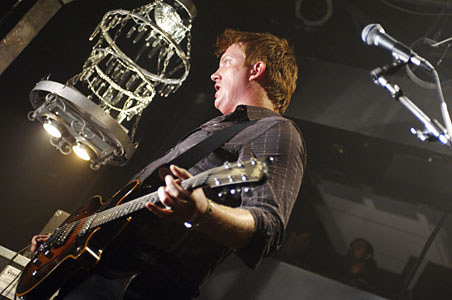 To celebrate their forthcoming Canada tour, the southern cal’ hard rockers Queens of the Stone Age, are set to release a “Limited Tour Edition” of last year’s ZME top 10 albums Era Vulgaris. The track will feature some awesome live versions of Era Vulgaris songs, as well as some of the band’s pre-Vulgaris songs. There’s one catch to it though: it’s only available in Canada upon its release on April 15. I guess it’s a good time as any for those Canadian jokes, ufff.

The QOTSA rarity will feature two 2 discs, on one CD there’s the 11-track original Vulgaris album, bolstered by a Richard File remix of the title track, a live acoustic version of the album’s “Make It Wit Chu”, and covers of Brian Eno’s “Needle in the Camel’s Eye”, Billy Idol’s “White Wedding”, and their unlikely take on Elliott Smith’s “Christian Brothers”. On the second disc you can find nine various QOTSA songs recorded live at Amsterdam’s Paradiso.

Currently the band is in New Zealand,  prepping for a short Australian leg of their tour, where they’ll make a few appearances in the V Fest as well. Soon after they’ll leave the aussie desert and head for more chilly plains, in Canada, when they’ll kick off their first show in late April. Bellow Era Vulgaris – tour edition tracklist and tour dates: