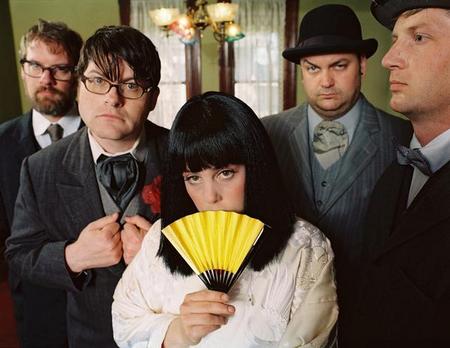 Hot on the heels of their previous critically acclaimed 2009 The Hazards of Love, the Portland five piece folk outfit is prepping for the release of  a new album, recently titled The King is Dead. The upcoming 10 track LP is set to roll out at the beginning of 2011, and will allegedly feature R.E.M. guitarist Peter Buck on three songs. Colin Meloy, the band’s frontman, actually stated that the R.E.M. feel will be present through out The King is Dead – getting Buck on board is a good indication of the influence acted upon The Decemberists.

The band has already featured three tracks live during their opening act for Bob Dylan’s tour, namely “Down By the Water”, “Rise to Me”, and “June Hymn”. You can download the album’s first single from the widget below all for the low, low fee of an e-mail address. Full tracklist after the jump.

The King is Dead is slated for release on January 11th via Capital Records.

The King is Dead tracklist: