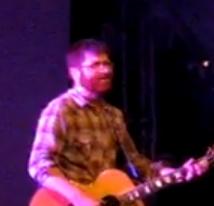 In a recent gig at Beck’s Festival Bar, in Sydney, The Decemberists played a brand new song, called “Springville.” Someone from the audience caught the song on tape being performed live solely by the band’s frontman Colin Meloy and his beautifully strung acoustic guitar. The sound is very folksy and warm, like much of their previous grand effort had to offer, last year’s critically acclaimed “The Hazards of Love”. Worth noting is that the video starts off with some pretty entertaining idle chat by Colin. [via YANP!]