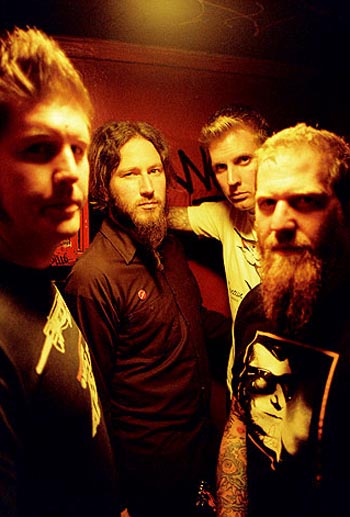 Fresh from their Pitchfork performance, [tag]Mastodon[/tag] delights us once more with a awesome video for their track “Sleeping Giant”, from 2006’s metal masterpiece “Blood Mountain“. The video is great, to say the least, director Roboshobo perfectly glimpsing the tracks meaning and lyrics. The video is set in a Sci-fi world, most likely in a space science laboratory. A blind humanoid, of apparent great intellectual capabilities, maybe divine, is set intro a chamber by two priests where he’s buried, after which life appears on his surface. Life develops from early reptiles to advanced humanoids, that eventually self destroy their micro world, through nuclear holocaust, revealing the the carbonized remains of the blind man/god.

The man behind the video, director Roboshobo was kind enough to shed some light. Via headbangers:

The concept for the video was kind of my take on the mythology that seems to be encapsulated in the album,” he begins. “I thought the reference to ‘Father Snake in the song sounded like an actual priest of some sort and thats where the robot came in…

Turning the blind man into a miniature landscape that evolves and eventually commits nuclear suicide — that was my take on the ’sleeping giant — like a volcano that’s threatening to erupt.

I also liked to think that the point of the ritual was to cultivate a crystal skull from the man’s bones after being in the earth for so long — sort of like the way coal turns to a diamond under pressure.