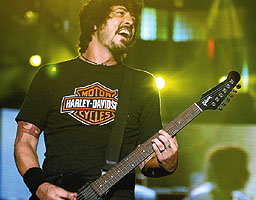 Well this most definetly isn’t a title your average rock band will fight for and I’m not sure it’s something you should take pride in. You don’t wanna fall into the trap of becoming all mushy and stuff.

So how come they beat Coldplay to get this title? To get the answet to that, you should just listen to the countless music scribes who can’t get through a profile piece on the act without mentioning how frontman Dave Grohl is the rock star they’d most like to have a beer with.

Against Me! bassist Andrew Seward speaks his mind about this thing:

“Absolutely that’s true,” says Seward, whose band will again take the opening slot when the Foos play MTS Centre next week. “They say that Dave Grohl and his crew are the nicest guys in rock ‘n’ roll, and they are not lying. We’ve even had beers with ’em, and I can tell you it is a very pleasant experience.”

Well who would have guessed things would turn out this way for Dave Grohl, as former Nirvana member. From being a drummer in the most bad ass band in the world to becoming the front man of the nicest band in the world…I wouldn’t think that’s possible!