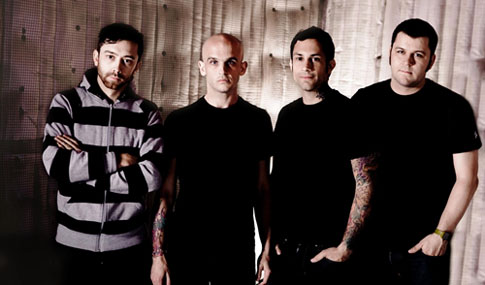 Chicago punk four piece. [tag]Rise Against[/tag], have just posted some updates, regarding the progress of their still untitled fifth album, on the band’s website.

After wrapping up a busy year of touring with the Taste of Chaos. a handful of radio shows and two holiday shows in Canada, we were spent and glad to get home. Presently we are writing and demo-ing for what will become our next record. Don’t expect it too soon, we’re just getting started early. We will bring the details as they come, we just wanted to check in and say thanks to everyone for another awesome year.

The new LP is expected to surface some time this summer or fall and marks the band’s new guitarist Zach Blair debut, who replaced former member Chris Chase earlier last year during The Sufferer & the Witness tour. Honestely these guys change through their guitarists more then I do my socks. Jeez. Also as a new year bonus, the guys have  just released a new 5 songs EP titled “This Is Noise,” that features two original songs and three covers.

This Is Noise tracklist: