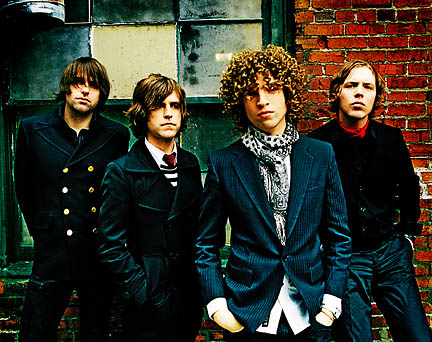 Canadian quartet Hot Hot Heat  released their long awaited fifth record Happiness Ltd. today, but unfortunately picked the wrong day to do it, as they’ll get little to no attention compared to the highly publicized clash between [tag]50 Cent[/tag] and [tag]Kanye West[/tag]. HHH frontman Steve Bays told Spinner later this day, that he doens’t really think he’ll outsale any of the hip-hop artists (really?), but said he would definitely want to join the victor at his party.

“I think we’re gonna be at 50 Cent’s after party, or maybe Kanye West’s,” Said Bays . “Whoever sells more records — that’s the party we’ll be at.”

If West is victorious, which could very well happen thanks to the extra attention he’s garnered with his pre-MTV VMA awards Britney bashing, Bays says he is looking forward to 50 making good on his promise of retiring. “I think it would be awesome if he quit the music industry,” the wide-eyed frontman said. “But, maybe that’s just in the U.S. Maybe in the U.K. he’d [change his name to] 50P or 20P in Da Pub.”

Results of 9/11 sales are still 1 week away, so in the mean time they’ll be celebrating their album release with a gig at Los Angeles’  Cinespace .