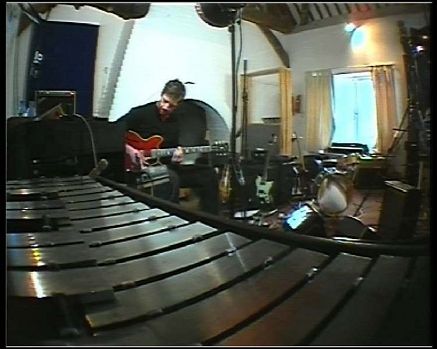 I sense a disturbance in the force ! [tag]Radiohead[/tag] must be up to something … again and their not being very discrete, although as always surprising. If you’ve had loads of fun with the Brits previous webcasts, thumbs down and scotch_mist, then you’ll be thrilled to know that the band have announced, as always though their deadairspace, a brand new live webcast on radiohead.tv, tonight! The cast will air sometime around 8-ish, London time, from Rough Trade East in Brick Lane, where they’ll be performing live In Rainbows tracks, in front of a intimate audience. Spencer Hickman revealed for NME, just how many fans they will be able to pack in tonight.

“The absolute maximum we can get in is approximately 250, but even I’m sending staff members home who don’t particularly like the band so we can get more people in,” he explained.

“We’re running a skeleton staff tonight. Some of my directors aren’t going,” he added. “If you’re a fan of the band you can get in tonight. It’s history – they haven’t played a venue this small in years. They probably won’t again.”

Well if you’re a true Radiohead fan and in the vicinity, you’d better head over there, history is in the works. Hurry though the cast’s in just a few hours. For the rest of us mortals, we’ll just have to eagerly watch it from the comfort of our home. Check back after the show’s over, as we’ll be posting the whole webcast.