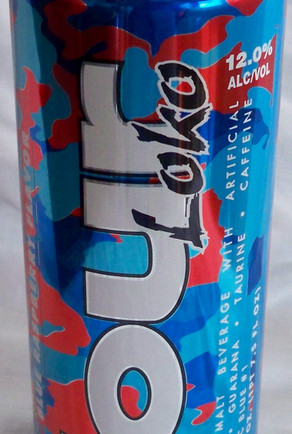 Does anyone still read the Village Voice?  Well, they decided to publish a Top Ten of the best rap songs about Four Loko.  ‘Cause, apparently, there are ten songs about it.  Who knew?

I’ve been sitting here going through the list – it has embeds for every song on the list, as well as short blurbs arguing for a given song’s spot on the list – and I can’t decide which part of this is the saddest (read: most hilarious).

Part of me thinks it’s the fact that you’ve never heard of any of the ten artists here which, therefore, kinda makes this list pointless. Yung Trap?  F.Y.I.? Gwop Starz? All of these artists are laughably irrelevant. But, then again, so is making a list about Loko rap songs. Ditto for the surrounding controversy about the drink.

Another part of me thinks the songs themselves are the most humorous.  Whatever comes to your mind when you think “Rap songs about Four Loko” is pretty much guaranteed to be what these songs sound like: busy keyboard-based production and clickity-clack drum patterns paired with a quasi-catchy chorus hook.  Think the Neptunes’ production work for Clipse songs, but without the forward-thinking or creativity. Or fun.

All that aside, as I write this I’m starting to believe that the best part is the collection of blurbs about the songs. Some are downright ridiculous in terms of reasoning (see #6) and some are so over-the-top that they border on self-parody (#1, #5).  And then there’s #4, Gwop Starz’s “Four Loko.” It’s so absurd that I’m going to quote the entire thing before ripping it apart:

By far the most consistent song thus far, Gwop Starz’s “Four Loko” contains verse after verse of unique Loke [sic] raps. The chorus starts with a familiar rap trope–“Sippin on some purple”–but then distinguishes this purple as the uva flavor of Loko. In fact, these rappers are explicit about their preference for Four Loko over other bodega staples (Camo, Joos, Hurricane, beer in general) and include the prescient lines, “Watchu sippin on I got that Four Loko/ My mind’s so throwed and I’m watching for the Po-po.”

Where to begin…OK, “the most consistent song [about Four Loko]”?  That’s like saying “Postal” is the most consistent Uwe Boll film. Who cares when they’re all awful beyond description? And “unique Loke raps”?  First, these lyrics aren’t unique in anyway: “Ain’t no drink on me, the drink’s on you/ What the fuck, fool? I’ma keep that Loko cool.”  I take that back.  That is unique.  It makes no goddamn sense, and doesn’t deserve any praise for any reason, but it is one-of-a-kind. Second, how can the idea for a Loko-based song be unique when you publish an entire list of songs about it?

But the most mind-fuckingly stupid part of the piece is calling the quoted lyric in it prescient.  Just to make sure I wasn’t loosing my shit, I double-checked the definition of the word. Yup, still means “foreknowledge of events” (as in “divine omniscience”). Or, for a lower-level definition, “human anticipation of the course of events.” So, exactly what is prescient about taking a drink of Loko, becoming inebriated and looking for police officers?  That isn’t foresight so much as a logical series of events.   Well, maybe not the looking-for-cops part, but still. And this is to say nothing of the fact that the verse is written in the present progressive form, not any future tense. That is, the verse implies the action is happening now (not later) and, therefore, can’t be predicted. This is akin to throwing a baseball and while you’re throwing it you surmise that you’re gonna throw it.

So I return to my original question: Who the fuck cares about the Village Voice?