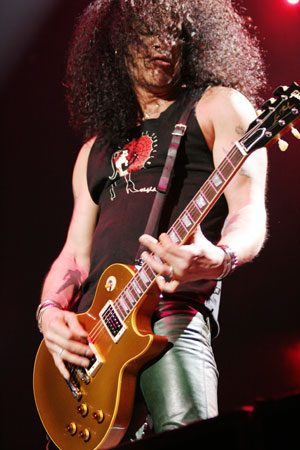 Possibly the most charismatic guitar player of all time, maybe except Jimmy Page, Slash from [tag]Velvet Revolver[/tag] and former [tag]Guns N’ Roses[/tag] is set to make an appearance in the best guitar simulator video game: Guitar Hero III. Guitar Hero III will be the third official installment in the Guitar Hero video game series, series notable for its use of a guitar-shaped peripheral to simulate the playing of rock music.

The rock icon will be featured as a full playable character, but which will have to be unlocked. To unlock him, you have to win him in 1-on-1 virtual metal duel, however you can duel Slash only after you successfully play all the songs in the game.

The current playlist for Guitar Hero III is:

[tag]Queens of The Stone Age[/tag] and [tag]Velvet Revolver[/tag] are also set to put some of their songs up for dueling.