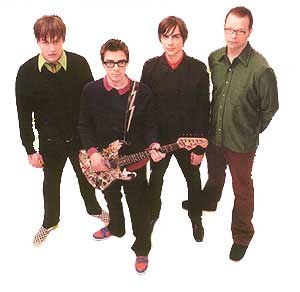 Last week we were all syked, when [tag]Weezer[/tag] finally revealed some details regarding their sixth studio effort, announce a definite release date for April 22. Now, the band’s bassist Scott Shriner, broke a bit of tension by responding to a few albumsix related questions and announcing the record’s official name: “Tout Ensamble.” Which, from my limited knowledge, I believe is French for “all in all'” or something like that, if any one’s got a better translation, let it rip. The musketeerish title is based on the fact that all of the band’s members will each get to sing lead vocals on Tout Ensamble. This should be interesting.

“I have never been so excited about a project in my life,” bassist Scott Shriner says. “Weezer fans truly have something to look forward to. The entire band has accomplished some of its most challenging goals as a group and as individuals. It’s all coming together on this album.”

In other news, the band’s frontman River Cuomo, is once again postponing his debut solo album “Alone: The Home Recordings of Rivers Cuomo,” being pushed up to December 18. Alone… will include “my favorite home demos from ’92 to ’07 featuring a lot of never heard before songs, a few covers, a few songs from my unfinished rock musical ‘Songs From The Black Hole’ and my original demo for ‘Buddy Holly,” as Cuomo puts it.