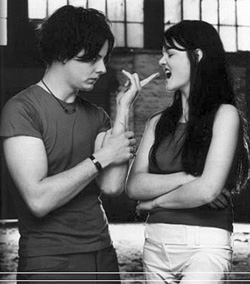 Remember the last “Conquest” single from the [tag]White Stripes[/tag]?Yeah the one in which bull fighter Jack gets his ass kicked. Great video, laughs and rockin,’ but now the duo wants to take the hispanic of the single even further, by releasing a alternate version sung in Spanish, suggestively titled “Conquista,”with a whole new video to go with it. Splendid idea mates!

The single, in both CD and vinyl form, hits the States February 19 from Third Man/Warner Brothers,  but watch out what you’re asking your local record clerk for, as Conquista will be credited to Las Rayas Blanca. That’s “the White Stripes” for you non-Spanish speakers. The two-track single contains “Conquista” backed by “Conquest (Versión Acústica De Mariachi)”, which we’re pretty sure means it’s acoustic and features a mariachi band. The alternate version video for Conquista will premiere on the music video channel mun2 Thursday, February 7, along with an interview with Jack.