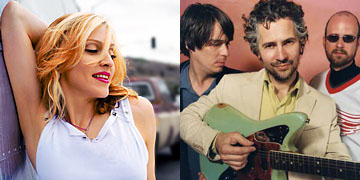 In this first quarter of ’09 we’ve been graced with some pretty amazing compilation albums. Actually, they were of such a surprising quality, that I can go as far as saying they’re even better than most of the regular releases we’ve seen so far. There’s the incredible indie compilation Dark Was The Night or the all star cast of Heroes, and now yet another great various artists release, a refreshing cover compilation, suggestively titled “Covered, A Revolution of Sound,” in honor of Warner Bros.’ 50th anniversary. It features an impressive list of contemporary acts, like The Flaming Lips, Mastodon, Against Me! or The Black Keys, to name a few, covering various hits like “Just Got Paid” by ZZ Top, “A Case of You” by Joni Mitchell or “Like a Hurricane” by Neil Diamond.

As a sample check out Flaming Lips‘ cover of Madonna‘s old classic “Borderline,” which can be found on Amazon, as a music video. Don’t expect anything special, visually – just the band getting psychedelic on the beat of a pop classic, turning it round, round, baby, round, round.

Here’s the full Covered tracklist, right bellow. The compilation is also available for ordering from Amazon.