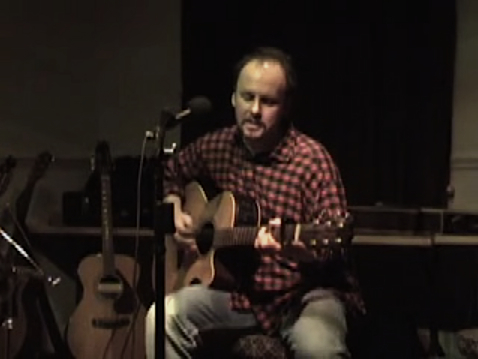 There are billions of unsigned and indie artists to be found online. Some are worth a listen, others are interesting but not quite there, but the vast majority is trying too hard to find the elusive new sound and thus burying themselves into experimental oblivion. Songwriters are always a penny a dozen, even cheaper than guitarists or out-of-tune bass players. Nevertheless, effective songwriting is a question of angle and attitude. A good story needs not to be original but relies heavily on how it’s told. How many times a day can one care for the heartbroken hero amidst the universe of “we all know that it’s going to turn out fine” trickery? In fact, there are amazing songwriters but effective writing and good web presence aren’t that much related for one to find them by accidentally surfing the net. Nevertheless, when one accidently trips over such an artist, the overwhelming feeling of comfort rises up. My latest discovery is Robin Tymm.

Robin is an artist from Ashbourne, UK, who claims that his singing arises from the necessity to have his songs done in shape of a record. For a long time he considered himself a writer and not a performer. He cites Bruce Springsteen, The Jayhawks and the likes of Counting Crows as influences but I am tempted to say he does sound like himself. He is also unquestionably guilty of the heartbroken hero complex, at times sounding like we’re supposed to actually feel sorry for him, but beyond the thin layer in which that daft lacquer sits, there is a true optimistic fellow dwelling on the small intricacies of everyday life. Come on, even Leonard Cohen has written dubious lines.

Robin’s debut album, the lovely subdued “A Simple Plan” (2004) spans different years yet feels strongly cohesive in its core. In “Going Nowhere Fast” the protagonist claims that “[he’s] not one for turning back” while also knowing that “[he’s] going nowhere fast”. It’s the perfect career introduction to an author that although self-admittedly not prolific, steadily released a album a year since 2004. The sophomore album, “Hanging In The Air” (2005) carries where “A Simple Plan” lacked. It’s obvious many of the songs here were written during the same time span. It brings a different angle and explains a little further into details. In “She Made Me Love Her” a sense of liberation from the previous slightly claustrophobic Bo Diddley inspired and inflected chuckle-shuffle “Baby In The Park” eases the groove by claiming that the love of the woman was conquered resorting to an unexpected pointing of a gun.

In 2006, the third installment “Footprint” was released and the self-deprecating but also more detached writing style started to arise. The lush “Unrequited” introduces the tone of the record which moves to the blue sky found on the accordingly titled 9th track, before settling everything to rest with a suitable “The Best I Can Do“. Admittedly as the result of a creative frenzy during the summer of 2006, the forth album, “Whole Lies & Half-Truths” (2007) yields the unquestionably stronger whole package thus far. The title track works as a summary for the album itself as well as a compilation of ideas found in his earlier work. “Birthday Song” enters directly to my very small selection of songs I really wish I had written. As far as I’m concerned, it’s one of the best magical songs ever to be put on record.

Robin’s latest album, “Fatal Flaw” (2008) starts with an upgrade to the more intimate sound of “Whole Lies & Half-Truths“, shaped as the beautifully rocking “Big Sky“, before moving to “Freedom” which works delightfully to set the remainder tone of the record. The hilarious and tongue-in-cheek – yet majestically inspired – “Shorter Fatter” does more to my image of Robin as a clever and literate writer than to actually reveal his physical appearance. “Reach” seamlessly blends with the previous track and effortlessly changes the tone. “Rolling With The Punches“, despite its title resemblance with the Randy Newman song, sadly reminds me of too many conflicts with people that never deserved them and yet are a building block of any human life. At least, my life.

“Fatal Flaw” is a consumate accomplished record that deserves a much wider audience. Any Robin Tymm record, in fact, deserves to be listened, if not solely for the beauty of a lone ranger shaping his artistry, for the simple truth (and some half-lies) found within.

Vitor is a portuguese songwriter and musician who occasionally contributes to assorted publications. He can be found either with a guitar and Moleskin notebook in his home studio or with a Mac computer in a nearby coffeeshop pounding keys in praise of the latest undiscovered music genius.

View all articles by Vitor Cunha