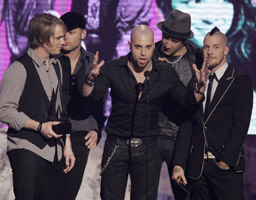 He may not have won American Idol but with his band Daughtry earned high enough honors at the American Music Awards on Sunday to share the spotlight with Carrie Underwood and Justin Timberlake. He won just fourth-place during the fifth season of American Idol.

Underwood, who did win “Idol,” matched her three wins at the Country Music Association Awards this month with three trophies Sunday: favorite female country artist, favorite country album for “Some Hearts” and the T-Mobile text-in award. “Thank you fans for going out and buying this album. You guys are amazing,” she said.

But Daughtry did a bit better. They made good and managed to win favorite pop-rock album for “Daughtry,” as well as breakthrough artist and adult contemporary artist. “Wow. I can’t believe we’re in the category with Justin Timberlake and Linkin Park. It’s pretty awesome,” the band’s frontman said. “I want to make sure we thank the fans again because you guys made this all possible for us.”

The favorite Pop-Rock band was Vancouver-based Nickleback and Timberlake was a double winner, earning male pop-rock artist honors and the soul/R&B album award for his “FutureSex/LoveSounds.” Timberlake accepted by video from Australia. Usher presented Beyonce with the international artist award. This should be something very important for her because it was just given to a handful of artists, including Michael Jackson, Rod Stewart and Aerosmith. “I’m so blessed to wake up every morning and do what I love. I don’t take it for granted,” Beyonce said. Mary J. Blige, Maroon 5, Avril Lavigne, Rihanna, Rascal Flatts and teen stars the Jonas Brothers, did a very good job aswell. Kimmel was the host and he managed to keep the people entertained even with his statement that Kimmel said the Writers Guild of America strike prevented him from writing any jokes for the show.