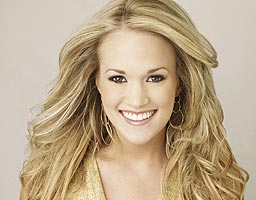 After the first American idol winner [tag]Kelly Clarkson[/tag] made it big with her impressive and lovely voice it is now the second album was the charm for the former winner Carrie Underwood. It was far better than the first.

She said something interesting about the title You step onto this ride called life, and it’s a crazy thing you don’t know anything about, but you get on it anyway. You do what you can to lean different directions to try and get it to go where you want it to go, but you can’t stop it – it just keeps moving. That’s why Carnival Ride works as my album title, because it describes the wonderful craziness that I’ve been through over the past couple years.

The fact that she has sold so many copies is more impressive since she has the critic charmed. Critical reception of the album so far has been mainly positive. A must have for country listeners.