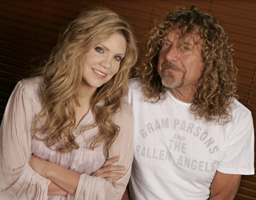 She is a master at slipping into musical styles. Being a singer, musician and producer, the bluegrass-country icon Alison Krauss has had, along the years, a stellar career. Having such versatility gave her the chance to work with artists as diverse as Sting, Brad Paisley, James Taylor, Phish, Dolly Parton and Alan Jackson.

But she is not going to stop here. Her latest project, with former [tag]Led Zeppelin[/tag] frontman Robert Plant could be a big thing. Produced by T Bone Burnett and released last week, Raising Sand is a dark, whispery record that finds them interpreting the likes of Townes Van Zandt, the Everly Brothers, Mel Tillis and Tom Waits.

“I think of it as a window into some other world,” she says of her collaborations. “You take away something by watching someone sing and watching them do something they were naturally born to do.”. He said that “I think my vision was a little more lightweight,” he says, sipping hot tea. “Alison wanted something more serious, with more colour and shade.”.

It is hard to say how it is going to sound but words such as dreamy and eerie are probably good for describing it. “The idea was to take them both out of their comfort zone. To take us all out of our comfort zones,” says Burnett, who selected the musicians and most of the 13 songs, which includes a composition by Plant and Zeppelin guitarist Jimmy Page called “Please Read the Letter” from their 1998 album “Walking Into Clarksdale. So it is not going to be something you hear every day.