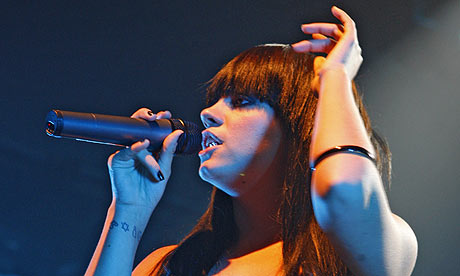 Image via The Guardian.

The Football World Cup in Brazil is just around the corner, with 9 days left. For you Americans out there, that’d be ‘soccer’, but for the rest of us, it’s football. Every world cup has a song, and this year… well, it kind of sucks; big time. Pitbull feat. Jennifer Lopez & Claudia Leitte – We Are One (Ole Ola). You can almost tell how bad it is just from the name. You can listen to it below (go ahead, I dare you), but let me just write a few things better than this song: Jack White’s new album. This guy playing Slayer on his banjo. Sebastian Bach singing a Maroon 5 song. Sebastian Bach singing a Lady Gaga song. A yogurt. Bread. Well, you get the point.

Taking advantage of the lack of a good song and her success from 4 years ago with “Waka Waka”, Shakira has also released a Brazil 2014 themed song – La la la (seriously, what’s up with these names?). The song starts off nice, but the electronic “let go” intermezzo is a pain – this is clearly no Waka Waka. Even so, it’s much more catchy, it has a Brazilian vibe and makes me want to play football more than Pitbull, so it’s OK.

People will be a bit confused by having two World Cup songs, I guess there’s no big problem. But wait! Lily Allen is, and she’s shared a new song, “Bass Like Home“, which she called her “unofficial #worldcup song.”

So what does this song have to do with the World Cup? Spoiler alert: nothing. To me, it just seems like Lily Allen is trying to piggyback the hype train. The song is quite good, it has a sort of old school disco vibe to it which makes it really catchy, and I really dig it. Just doesn’t have anything to do with Brazil. Oh well…