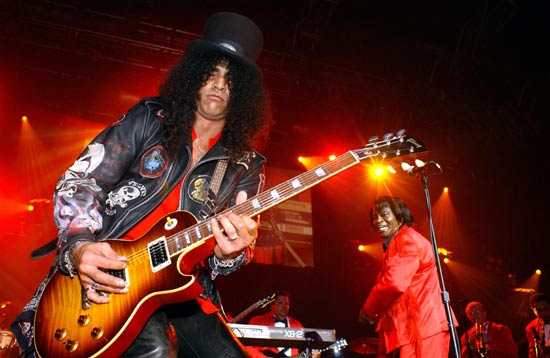 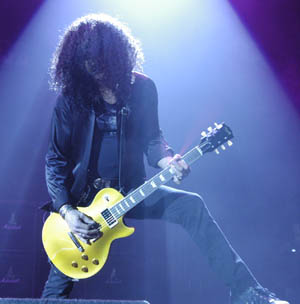 He was known as lead guitarist for legendary hard-rock act Guns ‘N Roses and his drinking is somewhat legendary. He is 42 and a father of two and he says that he came of age in a pre-Internet, pre-camera-phone era — one where entertainers were still entitled to a modicum of privacy.

But technology is at growing fast and there is a lot of gossip around the most intimate details of a rocker’s life. The distantce between the internet user and those things is measured in clicks. And there are not that many clicks; and while his hard-partying Guns ‘N Roses days are long behind him, Slash has been making the rounds with a brand new band in recent years: rock supergroup [tag]Velvet Revolver[/tag]. Band members are fellow former Gunners Duff McKagan and Matt Sorum, ex-Stone Temple Pilots frontman Scott Weiland, and Wasted Youth guitarist Dave Kushner.

But the days when you bought the music and went to every concert you could reach that your favorite band performed seem to be fading. With a world of new marketing strategies there are not that many things a world wide rock star could do. “You can’t help but be stuck in the middle,” said Slash adding that “I have a lot of old-school habits, and all the while (I’m) making new adjustments, just picking and choosing as to what’s cool and what’s not cool.”. The rock world is a bit divided. “I think a lot of the allure of rock ‘n’ roll, and even the entertainment business, was due to the fact that it was so unattainable, that it was out of reach,” he explains. “At this point you can follow someone from their bedroom to the market to the studio to the f–ing airport. At some point you just lose interest.”. That is probably not going to happen with Velvet Revolver. The band members are releasing very good music and they still have a lot to say in the music world.

The recently released Libertad is very good but it did have a rocky start — sidelined by a false start with producer Rick Rubin, Slash’s drug troubles, and an apparent round of rumour-mongering courtesy of ex-bandmate Axl Rose — thay they struggled with. But they showed “what we’ve accomplished,” as Slash himself puts it. He has never been one to wallow in the past and claims that he has not spoken with Axl for 11 years. What the people should understand is that they should not care about what rock stars eat or wear or even what they drink. They should care about the music.