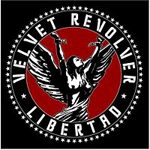 If [tag]Velvet Revolver[/tag] never made it to its second album, i would be any thing but surprised. I mean face it when you have such a conglomeration of stars and egos from the ’80 hard rock times, featuring ex-members of Guns N’ Roses and fronted by arguably the biggest ego of the grunge era, [tag]Scott Weiland[/tag] you can’t really hope for a stable bunch. But they’ve proved me wrong, not only they’ve been together for 3 years now but they’ve managed to make a better sequel to their acclaimed debut LP “Contraband“, in the form “Libertad‘.

Contraband was a great album, but i didn’t fit one bit. I mean it was like I was listening to GnR all over again, there’s nothing really bad with that but they didn’t had that individuality. With Libertad things are more cohesive, they finally look, fell and sound like a real band and have gained that individuality they’ve striven for. The 3 years of touring together has really jelled and solidified the band and together with Brendan O’Brie’s excellent producing work, who produced all five [tag]Stone Temple Pilots[/tag] albums, ensures Libertad’s success.Scott Weiland’s and [tag]Slash[/tag]’s huge egos no longer conflict each other, better yet they intertwine resulting in a better on-stage/off-stage experience. Axl must be really jealous by now.

The LP debuts with the hard riff track “Let it Roll”, a stunning opener with Scott’s boomy vocal reminding me of a early Jim Morrison, which power us up for the next track “She Mine”. She Mine employs a some what unorthodox tempo with stunning riffs and funky beats, I can almost feel the RHCP influences. This leads us to the albums first single “She Builds Quick Machines”, a stunning track i might add with excellent Slash solo guitar riffs, but which requires a few listens to sink through.

Basically the same style as in “She Builds Quick Machines” can be seen in “The Last Flight”. Stone Temple Pilots influences are inevitable as its the case with “Get Out The Door”, “Pills, Demons & Etc” and “American Man”.

It seems that at the suggestions of producer O’Brien they covered Electric Light Orchestra‘s classic “Can’t Get it Out of My Head”. The cover has been highly criticized by the music connoisseurs and really gave VR a hard time with it, personally i think this version of ELO’s classic is acceptable, dusty glam vocal and retro shimmering guitars make it a good addition to the tracklist. “For a Brother” is a touching track with clear reference to frontman’s Scott late brother, who died from a O.D. recently. The LP closes with “Gravedancer” power ballad packed with classic Slash riffs and predictable mid-tempos, but hand in there as your in for a threat: after a while the song goes into the hidden track “Don’t Drop That Dime”, a hilarious country rock song which literally made me laugh my ass off!

While “Contraband” brought retro back in fashion in the music business “Libertad” brings it to a whole other level. The band has deeply matured and has really started to shine, the ego clashes between the charismatic band members have disappeared, leading to the creation of a cohesive and stunning record. Rock fans, new and old, will be delighted by the mix of retro and modern VR brings with Libertad. Don’t miss the opportunity and get it; i honestly think it’s the best rock material i’ve heard in a ages.