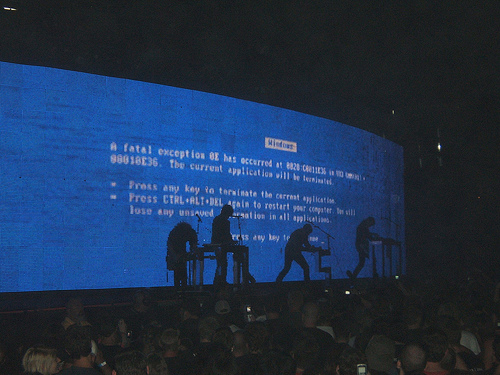 A flickr user posted this yesterday, after attending a Nine Inch Nails show, most probably in Saint Louis’ Scottrade Center, on August 20th. The pic perfectly surprises the much feared blue screen of death, that’s been haunting computer geeks around the world! CTR+ALT+DEL :(

Anyway, the Windows 98 error screen was obviously faked by NIN, as fun thing. After all, Trent is notoriously known as a huge “Apple fan,” and righteously so if I may dare. I mean, you’d never get something like this with MAC OX. The rest of the NIN tour dates can be found bellow.