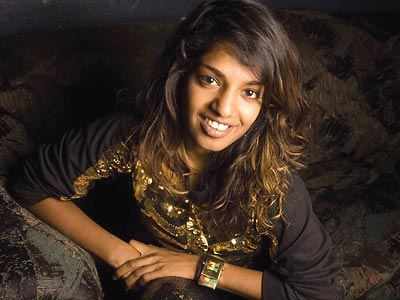 In a recent interview for Rolling Stone, the flavorful Maya Arulpragasam or M.IA., as she most known in the in hip-hop scene, revealed a myriad of scrumptious details regarding her upcoming, still untitled, new album. She confesed to RS, among others, that she wasn’t all that happy with how Kala come out to be (for what’s it worth, we were very happy with it, Maya), and that her new material will be her ‘back to basics’ album – honest and true, filled with her utmost personal introspection.

“The last album, I didn’t actually sit anywhere long enough for it to really be in my life and to really think about it. Now I’m putting out my next album, and the world has changed. I came up talking shit about Bush, and it’s great that it’s changed, but I don’t know how much it’s changed, and I’m exploring that … I just want to be real, whatever that is. Even if my songs are shit, and if I have flaws and if I’m confused, if I offend people or if I don’t offend people, I might try to work it out in public– just so you know that it’s OK to think that thinking’s not a dirty word.”

On her five months in the making album, M.I.A. says she has more or less put samples a bit aside, to leave more room for her singing. To help her on the production work, M.I.A. brought in Baltimore’s Blaqstarr, of which he said  “[he] simply makes music that sounds good, and I needed that. I definitely needed to come to music on this album, to make music. I don’t want it to be gimmicky or silly or hipstery.”

Blaqstarr isn’t the only guest star on M.I.A.’s new album though. On ‘I’m Down Like Your Internet Connection’, one of the stand out tracks, she brought in a Filipino call center employee to sing the hooks, after the idea come to mind after she spent hours trying to solve her internet connection.

“I was having issues with my cable and wireless, and I was on the phone [with tech support] for three hours, and I thought, ‘Maybe this needs to be part of my music, could you just learn these lyrics and sing it down the phone to me?’ 10 phone calls later, I have Internet that sticks and a song.”

I guess we’re all curious to hear this one. One can only wonder what songs she might write when confronted with other annoying  crap. Hey, next time you catch her in traffic she might even feature you on her next album. Keep a watchful eye.