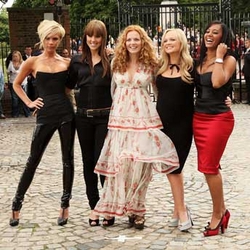 These few weeks were packed with [tag]Spice Girls[/tag] reunion speculations. Some of the group’s members confirmed the rumors, other denied them. It was damn right confusing!

Well it’s pretty clear now, Sporty, Posh, Ginger, Baby and Scary are back and ready to tour in a venue near you. The announcement was made later today at London’s 02 Arena, after taking some photos together for the first time since their breakup in 2001.

The most famous girl band of all times are set to embark on a worldwide tour featuring over 12 venues.

Here are the tour dates and locations ( venues will be added as soon as they’re announced ) :