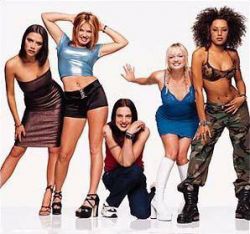 A few days ago former pop star [tag]Victoria Beckham[/tag], sparked up the press and the music schen when she said that a [tag]Spice Girls[/tag] comeback will happen soon.

“We’ll see what turns out, but between you and me, I’m really hopeful that it definitely will happen.” said Victoria at the Glamour Awards where she won the Entrepreneur and Woman Of The Year gongs.

Yesterday Spice Girls played reunion tracks after nearly 10 years! “It’s been so many years since I’ve done any singing it freaked me out” said Victory for the Daily Mirror. “I always said I wasn’t ever going to sing again and I really didn’t expect to. But once I got going it was fun.”, she added.

“The new songs are a progression of the old Spice stuff – nothing radical and still poppy but a bit different. We are all impressed with them,” said Victoria

The five original Spice Girls will reunite for a reported $50 million in order to play six live dates in London, Tokyo, and Las Vegas, following the release of a greatest-hits album.