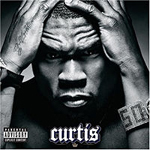 [tag]50 Cent[/tag] has had an incredible rap career. With two out of two albums with his name on them going 10 or more times platinum, and pretty much anything dealing with him being blessed with success (aside from any recent G-unit artist’s album), its no wonder the record selling giant comes into the game with a big chip on his shoulder. “Curtis“, his third LP, is something 50 expects to easily go platinum out the gate. Seeing his track record it’s easy to agree that that could possibly happen, but the question is does 50 really deserve that? 50 says this album is pre “Get Rich or Die Trying”; strait gutter with out the glitz and glamour. What we have here though is an attempt at this plan but a loss of focus throughout the album.

50 seems to start off with the “prequel” idea at the start of the album, with a hard hitting introduction from a gangster movie dealing with a massive gun stash. The second track, “My Gun”, burst in with a snipe like snare and loud thumping bass. 50 destroys this track and begins to show that what he said is true. This album is purely raw, gutter, street, and far from where he is now. The next four tracks only further this finding as they are purely gutter – strictly dealing with life on the hustle. Though this gets pretty repetitive and unoriginal by the sixth track, “Come and Go”, at least he has a clear focus and design for this album.

After Come and Go, the album is downhill from here. The single, “Ayo Technology”, has 50 out of his element as he struggles to conform to the erratic beat. “Follow My Lead” accompanies and at this point the album seems to have lost its way. Should this be on the album? Shouldn’t this probably be at the end to help close the album? Why here? Oddly after this is “Movin’ On Up”, which changes the album back to its original direction with 50 boasting about chrome rims and holding down the block. The duds “Strait to the Bank”, and “Amusement Park” follow as 50 seems to stray off from the direction of the album again. By the fourteenth track it doesn’t even seem like he’s trying anymore. With lethargic lines as “You want a problem with me/ no problem it’s all good/ I aint fresh out the hood/ Im still in the hood”. And THE WORST production both Dr. Dre and Eminem have ever created, you begin to wonder is this 50 Cent’s new album, or a mixtape he just put out. He redeems himself with bangers like “All Of Me” – which Mary J. kills I might add – and the Havoc produced “Curtis 187”, but it still doesn’t feel complete.

Ending with “Touch the Sky” (Kanye anyone) featuring an abysmal Tony Yayo, you are left with what seems to be a lack of effort from someone with tons of talent. With tired, repetitive lyrics, and average at best production it doesn’t seem like 50 came to play. His cockiness seems to translate to what can only be seen as an extremely average album. The lack of focus, originality, and out right care deems this album to be no better than one of his mixtapes – which ironically he hasn’t put out in a while. What we have here in its purest form is a very average album from a man who doesn’t care to give his all.