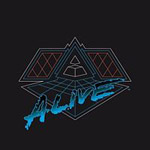 Without a doubt, the eccentric electro duo, [tag]Daft Punk[/tag] can be considered true pioneers and house music forefathers, gaining worldwide notoriety thanks to their provocative blend of progressive house, funk, electro, techno, and hip-hop styled breakbeat. Although Daft Punk is one of the best things to come out of a studio, they’re also a force to be reckoned with live as well, fact that the good people of Paris can easily relate to, as this summer the duo played live at the Bercy arena in front of over 20.000 people, unleashing hit after hit. It was truly a magical night for the lucky Parisians present at the show, some would say it to be a crime not to record it, but Daft Punk haven’t only caught on tape, they’ve released the live session under a new record: “Alive 2007“.

The CD captures the exuberant multi-media spectacle of Thomas Bangalter and Guy-Manuel de Homem-Christo’s first hometown show in 10 years.Cool, but where’s the DVD?! Well there isn’t any and there won’t be one either, not for a long time anyway. Although some may feel frustrated, if you really think about it, there’s really no need for a video; the whole Daft Punk experience is about feeling their music, more heart then brains. Still, where’s the DVD? :D

In essence Alive is a huge mashup of pumping bass lines, steady drumbeats, and cooing vocoders, thus old and favorite classics are cut and glued into new pieces, the end result is a somewhat different and original material; it’s definitely a new experience. It’s really fun to listen to retro gone new-school Homework classics, mashed next to Discovery‘s addictive funk beats, but the record’s true value lies in the ability to improve and recreate the disappointingly repetitive Human After All, washing their sins sorta speak.

Television doesn’t rule the nation, Daft Punk rules the nation with this marvelous “Alive 2007”. The waiting may have seem long for many, but they’re Alive and Rollin and Scratchin Around The World One More Time with their Technologic Robot Rock. They’re comin’ down, DaftNDirekt, to see us Face To Faced. Time to feel Da Funk. Daft Punk are getting Harder Better Faster Stronger.