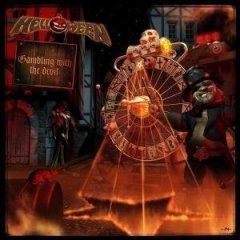 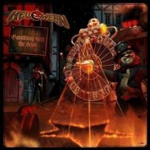 Their gamble is the fact that thay are not adventuring from what they are able to play. They made it big in 80s with what were to be classic metal tracks. By doing that they are one of metal’s most revered acts. “Gambling With The Devil” delivers more of that stunning signature [tag]Helloween[/tag] sound. But the bad thing is that aside from Final Fortune and Fallen to Pieces the tracks are similar to their other releseas. Those two tracks are in fact probably the best here.

There are those who prefer the other vocalists that the band had namely Kai Hansen and Michael Kiske. Andi Deris is often regarded as not so good but this shows that he too is able to make music in the true Helloween style. He may not sing guitar as Kai Hansen and he may not have the ability to hit extremely high notes as Kiske has but after he revived the band after the unsuccessful Chameleon and sounds very good.

The guitar makes this release be as good as it is. From the spoken intro “Crack The Riddle” by Biff Byford from SAXON to “Heaven Tells No Lies” the twin guitars rock. They rock reminding you of the days when the band members were younger. “The Saints” has a nice thrashy riff with a catchy chorus similar to something from Keepers 1&2 and “As Long As I Fall” was chosen to be their first single, with a moody piano intro, and then some corny vocals with a piano during the chorus. “Paint The World” is dominated by the crunchy riff with some nice guitar harmonies but the chorus is very good and not so corny. “The Bells Of The Seven Hells” has a very good riff and the lyrics are very anti-religious and catchy.

This is not as good as the releases from the glory days; those were groundbreaking. But this does not mean that it is not good. It is better than some of their releases. A lovely guitar tone, warm vocals, heavy but not over-powering drums, and a thumpy bass say a big part of what could be said about this.