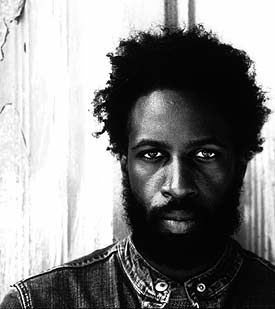 Saul Williams is a man of many talents: poet, preacher, actor and somewhere along the road, a musician as well. His third record “The Inevitable Rise and Liberation of NiggyTardust!”, produced by his long time friend NIN frontman Trent Reznor, will be available for digital download, at his website, for free on Halloween (October 31).

Well actually the the download system is more of a [tag]Radiohead[/tag]-esque one, with a free download limited to 192kbps MP3s and a $5 version, that gives the choice of downloading 192kps MP3 version, 320kbps MP3 version or lossless FLAC version. Those who emphasize quality might be compelled to actually pay for it, but as Mr. Saul clearly doesn’t even have a ounce of Radiohead’s fanatic fanbase, It’s pretty clear he won’t make any real money. Clearly this isn’t a case of money, as I’m sure Saul Williams sees past such meager things as money and prefers to give something back to his fans. Here’s how Trent Reznor sees all this:

“There are obvious similarities in how Radiohead just released their new record and the way we’ve chosen to. After thinking about this way too much, I feel we’ve improved upon their idea in a few profound ways that benefit the consumer.”

Besides Trent, who claims this is the most involved project his been besides Nine Inch Nails, Saul’s guest list features CX Kidtronik, Thavius Beck, and others, and was mixed by Alan Moulder. Williams also says that this will be a special album to be seen on live shows as well and by what I’ve read so far, in the vague news, sketches and press releases scattered all over the internet, it seems like this is a concept album. Here’s what Saul himself said about the particular musicality of his upcoming LP:

“The NiggyTardust! concept sets me free to do more on stage with costume, etc. than one might expect from a regular Saul Williams show. It allows me to put my theater training to use. I’ve also thought long and hard about all the discussion surrounding racial epithets etc. and chose this title as a means of furthering the dialogue while also showing how creativity will outlive and outshine hatred of any kind.”

Haven’t danced on a hip-hop record for a while now. Anyway tracklist bellow and don’t forget to pick up Saul Williams new record on Halloween, at least it’s free.