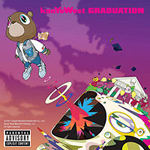 [tag]Kanye West[/tag] has been through an amazing journey through his career. Debuting on a classic album (The Blueprint), putting on an amazing show with The College Dropout, and not falling for that sophomore slump that so many succumb to with Late Registration, Kanye has constantly stayed on top when put on center stage, steadily developing with almost every appearance. Through this comes “Graduation“, his third album, and the first off his GOOD Music label.

Kanye’s popularity stems from him not being stale. Normally, rappers with one producer headlining the album, suffer from a lack of truly original and diverse beats. Kanye dodges this rule by constantly experimenting with his craft. His first album being more of a soulful affair, departs from this on his second LP by bringing in a much darker tone, production wise, and does the same with this album as he dives into more techno/punk oriented samples and instruments. Because of this, Graduation gives off a much different vibe and sound than any of his other projects.

From the techno and synth laced “Flashing Lights”, to the upbeat and electronic single, Stronger, Kanye shows a slightly different side to his production. Not saying that he doesn’t go back to his original soulful style, such as in “The Glory”, but Kanye had one major goal when creating this album; for it to be stadium status. To be so grand that it would be fitting enough to be played in any stadium, and with this he has succeeded. Songs like “I Wonder”, while although providing a soulful voice from Labi Siffre, thrusts through your speakers with thriving bass patterns, and sharp snares over blistering synth chords ending in a string of violins to fully embrace you in the ambiance of a stadium like track. “Good Life” continues this by using T-Pain’s skewed voice to complement this feel good track. Backed by odd instruments and an organ like piano, Kanye creates an instant pleasure to the ears.

Lyrically, Kanye has also grown; although not on par with the likes of a Nas, Lupe, or Common, Kanye has grown a lot from his College Dropout days. An excellent example of this is shown in one of the best songs on the album, “Everything I Am”. Production wise the beautiful piano work, laid back drum pattern, fitting scratches by veteran DJ Premiere, and soulful vocals, provided by fellow GOOD Music artist Tony Williams, all culminate the perfect environment to what could be seen as his most relevant work to date. Kanye begins by stating what makes him different from other current artists, but then turns towards himself and talks about how his ego gets in the way of his career. Kanye then switches and begins talking about the killing that is boasted in the hip-hop genre today as he outwardly begs you to really think about what it would truly be like to face the loss of another man.

What makes Kanyes lyrical effort so commendable is that he does not become preachy through any of his tracks. Songs like “Champion”, “Homecoming”, or the above mentioned “Everything I Am”, have different and layered meanings the more you listen to the lyrical content. This then pulls Kanye out of the producer only range and steps him up to be a legitimate and respected rapper.

Graduation is a different yet interesting album. From the beautiful introduction that is “Good Morning”, to the revealing ending that is “Big Brother”, Kanye makes you listen to what he has to say. His ego although ever present in this album isn’t his only side as he tries to explain to critics his need to be heard and respected. Though some tracks, the forced, average and expected “Barry Bonds”, featuring Lil Wayne and the failed experiment known as “Drunk Hot Girls”, featuring Mos Def, could have been left by the wayside. More of a college/graduation feel could have been implemented into the album via skits like those of the previous two. Kanye delivers on what can easily be called an evolution in his style. Whether you like him or not Kanye can not be denied by the fact that he has proven that he is willing to try, experiment, and evolve.