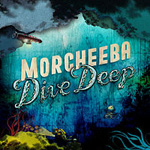 The mid 90’s saw a new genre of electronica to surface, namely the cult phenomenon of trip-hop, that characterized itself through a eclectic blend of downtempo electronic music and hip-hop. Among representative trip-hop groups to emerge from the mid 90’s scene were Massive Attack, Bjork, Portishead and of course [tag]Morcheeba[/tag]. The later formed by brother Paul and Ross Godfrey, soon joined by the smokey vocalist Skye Edwards, stood out of the regular trip-hop bunch because, while the rest of the scene was playing down tempo beats, Morcheeba was exploring more blissful, soulful territory mixing in alternative rock, pop and even blues to achieve a more up tempo experience. This made them famous as a chill out/ambiental group, a formula that proved to be successful with over 6 million records sold and several world tours.

On Morcheeba’s previous record, the 2005 severe slump The Antidote, long time singer Skye Edwards departed the band, for a solo career and was soon replaced by Daisy Martey (Noonday Underground). The collaboration was short lived and of severe consequences, as Daisy simple didn’t mix well with the Godfrey brothers’ style; the end result was a clumsy LP and a broken reputation. It was clear for the brothers that a another permanent member wouldn’t do, so on their current latest recored, “Dive Deep,” the duo have called out a whole lot of guest vocalists, not very famous, but each almost perfectly matching each song’s mood and vibe. Collaborators include the folksy English singer-songwriter Judie Tzuke, American rapper Cool Calm Pete, Norwegian weary vocalist Thomas Dybdahl and French singer, Manda.

This exact diversity of artists makes Dive Deep so special, as every musician brings something of their own to each song, making it a more unique experience; it’s basically like listening to a mixtape. Speaking of listening, the brothers stay true to their chill out roots on this one too. I’m sorta’ in the habit of falling asleep o records, be it grunge, electronic music, hard rock or heavy metal; depending on my mood. Well while Dive Deep was playing on repeat, on the background, I had one of the most relaxing sleep in years. It’s hypnotic beats, slow weary guitar chords, haunting slides and luxuriant percussions form a calming and melodic environment, that’s sure to destress even the most tense.

The album starts out with a melodic boom, as “Enjoy The Ride” rolls out. The song’s a beautiful, soothing synth pop ballad, in which Judie Tzuke’s R&B vocals resemble those of Beth Ross, to a extended; it feels however as the track is over-produced and over-polished. One has to wonder how the song will sound live. “Riverbed” is pure class, a chill out anthem with both a acoustic guitar and a slide guitar on the background as Thomas Dybdahl unleashes his Nick Drake crossed with Leonard Cohen vocals.

On “Thumbnail” things spin 180 degrees, as Ross Godfrey takes charge of the instruments over a dark dub groove, configured by his brother Paul. “Run Honey Run” is the only cover song that Morcheeba has ever played, on any album, as Bradley Burgess plays John Martyn‘s lesser known country-folk classic. It’s definitely a new direction, but it may prove to be over bold. “One Love Karma” features the Korean based, Queens raised rapper Cool Calm Pete, as walks out on a dying relationship. “Au-Dela” is Morcheeba’s first French track, as Manda lays her soothing vocals on top of a finger picked folk guitar. Towards the end Dybdahl delivers a soft-soul outtake in the form of “Washed Away,” while the group reveals its more progressive side on “The Edge Beyond The Edge.”

Dive Deep is definitely Morcheeba’s full throttle come back to the form that made them what they are today. It has some downsides too, mainly I find it to be too safe, especially with a over comforting production and some songs seem naked, with little to no secrets after a first listen. But all in all it’s a album that brought a great deal of freshness to Morcheeba, at the same time preserving the vibe and style with which the Godfrey brothers have become famous.