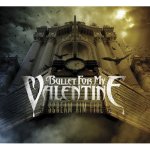 Well I had heard a whole lot about this album before listening to it; and most of what I’ve heard was really bad. So I started listening to it with kind of low expectations, not being a [tag]Bullet for My Valentine[/tag] fan, and I to my shame I kind of believed they would screw up, but I was pretty surprised to see that it’s good music. A whole lot of people, especially from the US gave it really bad reviews, motivating either that it’s a copy after [tag]Metallica[/tag], either that there’s not enough screaming in there, and all sort of dumb reasons. I’m gonna say it again, as far as I’m concerned, this album delivers. Sure, the guitar is basically simple stuff, and the riffs are somewhat predictable at a certain point, but they evolved and wanted to try something different. They wanted to blend modern metal with some old school heavy riffing metal, and they did a more than decent job. They grew up, their music grew up too, and although they are just a bit predictable, the riffs sound pretty good and fast. A kind of in “it’s in your face and there’s nothing you can do about it” type of melody; you know what’s gonna, come, you can feel the screams are almost here, and that’s great!

They’ve also improved a lot. Still, they can progress so much more, because they’ve showed an enormous potential and I’m sure their next release is going to be even better!Also’ I’ve read that some people would go so far as to call them “the future of metal”, and that kind of things. I would definetly not go so far as to call them that, without undermining their merits. They’re a great band, but they’ve still a long way to go. Anyway, back on the album, there’s not much to say about the songs, except for the fact that they’re a bit repetitive. If you are already familiar with their style, you know somewhat what to expect, but prepare to be a bit surprised. It will get you in the same mood, but in a different way (for some reason, I just feel the urge to play NFS when I’m listening to this record).

Anyway, an album filled with memorable choruses, catchy guitar melodys, and very good musicianship, with plenty of hooks. With a bit of diversity it would have had a chance of being a memorable album, but in this way, it’s just good music (even great at some points). No more, no less. But for those into this face of the genre, it definetly is a must have. For other people, try it, you may be hooked.