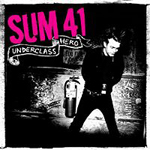 Just when you thought you heard the last of [tag]Sum 41[/tag], the Canadian trio are back to prove us wrong. After 10 years of being together, 4 platinum albums and numerous sell out tours and gigs, the Deryck Whibley fronted band return with their fifth studio release “Underclass Hero”. I have to be frank, i just couldn’t give it more then 3 listens, half way through the second one I was swept by a sens of nausea; it’s horrid. The whole album’s like the retarded unwanted baby between [tag]Greenday[/tag] and [tag]Blink 182[/tag], it’s something that “Weird Al” Yankovic would really call Canadian Idiot. Ok, you can lynch me now.

The first 4 albums were some what fun, but at this point they get way to boring the ‘been-there-done-that’ sound is everywhere and gets tormenting at some points. I mean the band’s been on the spotlight for 10 years now, playing songs spanning from pop-punk, glam-rock, rap-rock, nu-metal, old metal etc, copying from here and there but still haven’t grown their own style. Title track and lead single “Underclass Hero” is one of the few listenable tracks, with guitar riffs and punk breakouts that reminds me of one of their first singles “Fat Lip” from 2001. Apparently the band have tried to diversify their lyrics and messages, thus more “meaningful” songs can be found on this latest addition, songs like “March of Dogs” and “Confusion And Frustration In Modern Times”, a direct political critic to Bush’s leadership skills and to the direction the USA is going to, which however fails in delivering any real message, but rather sound like the ramblings of some frustrated teenager.

Deryck, amongst other things also talks about personal issues, like in “Dear Father <Complete Unknown>” which is about never meeting his dad and dealing with the fact he probably never will, or the departure of the bands lead guitarist,Dave Baksh, for a metal band in “So Long, Goodbye”. Deryck actually made a statement regarding “Underclass Hero”: “This record has the greatest elements of everything we’ve ever done. We wanted to take what we felt we did the best and evolve and develop that. It’s definitely different lyrically and musically and by far the most personal to us.” “Definitely different lyrically and musically” ? Common Deryck it’s got copycat written all over it.

“Walking Disaster” is one of the more rough songs of the album, heavily influenced by the previous album “Chuck”, trying to be mean and hard, but in the end failing miserably. Same goes for “Speak of the Devil”, same Chuck influences and same metalish tentative, with fast guitar riffs and pitching vocals, but that just doesn’t deliver, while “Count Your Last Blessings” again goes to Sum 41’s roots containing the same rebellious gusto as “All Killer No Filler”.

This a poor effort from behalf of Sum 41, i think they really tried too much to make a good record, to reach “All Killer No Filler” past massive success; but that’s impossible unless they evolve musically and stop putting out the same old stuff. They seam content on releasing the same punk anthems that rock your day today, but simply becomes annoying tomorrow. It’s a no buy record, unless you want to listen to some awful political opinions and over-produced music.