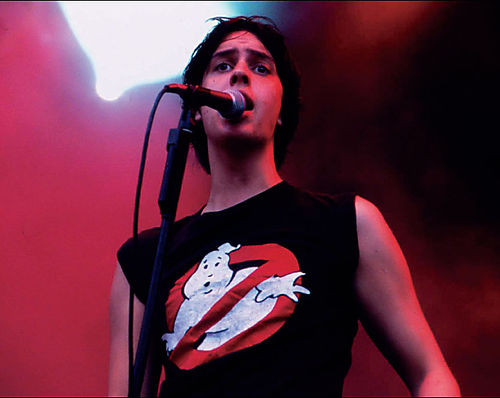 It can be hard to know what to make of the latest solo sideline project from Julian Casablancas of the Strokes. In what must be viewed as a bold move by some, the gravel-throated frontman has opted for a futuristic apocalyptic vision as the platform for his solo adventure. Recorded in New York, Nebraska and Los Angeles, “Phrazes for the Young” was recorded over an 8-month period, with production provided by Jason Lader and Bright Eyes guitarist Mike Mogis (hence the Nebraskan connection). No stranger to cracking the whip in the studio, Mogis has also shaped the talents of Rilo Kiley and The Faint for Conor Oberst’s Saddlecreek Records.

For the group that is/ was the Strokes, well one can only wonder. Even though they called their long term hiatus a “much-needed hibernation period”, not one member went gathering nuts for the winter. A quick click on to their official site reveals a newsreel of numerous solo projects (including the more adventurous move into photography by guitarist Nick Valensi). It can be hard to know what to make of all these outside distractions, especially since the band went back in to the rehearsal studio in late March to work on their fourth album. What was reported to be coming to fruition in the “not too distant future” has, of course, yet to materialise.

First impressions from the promotional video suggest that Casablancas was partial to the odd epic cartoon during the 80’s – Ulysses immediately springs to mind. Music wise, it has a strange Killers-esque soundtrack, with reliable 80’s synth leads lighting up the sparse sonic backdrop. Another significant detail that was omitted from the promo was the small matter of lyrical content, but it won’t be long until we are relieved of our anticipation, as there is a European release date set for mid-autumn.

So, Strokes fans – if there are any of you left out there – it’s yet another side project to tie us over until the “not too distant future”. At least that’s all of them now.