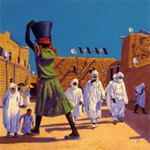 I’ve always been fascinated by the prog and experimental rock scene, being a fan of old school musicians like Yes, Pink Floyd, King Crimson, The Beatles or The Velvet Underground, but also following contemporary acts like Xiu Xiu, Dream Theater, Tool and not ultimately [tag]The Mars Volta[/tag]. The band first popped under my radar with their highly praised 2003 debut De-Loused in the Comatorium, a concept album revolving around a protagonist in a drug-induced coma, but it was their sophomore release, France The Mute, that got me hooked, another concept album, based on a random diary that was found in a repossessed car. The third record Amputechture, written as a simple studio album, however, came as a total disappointment, with repetitive hooks and riffs. It seemed like TMV ran out of ideas, but on their latest, forth installment, titled “The Bedlam In Goliath,” the band has returned to it’s conceptual album roots, with the same epic hooks and melodies, this time heavily funk infused and with a story about the occult.

But this was a album that almost didn’t get to see the light of day, as band members can surely attest. It all started with a Ouija board, the whole centerpiece of the album. The story goes like this: guitarist Omar Rodriguez-Lopez bought the Ouija board, later named as the “Soothsayer,” from a local flee market, in Jerusalem. The board soon became a substitute for drugs, in the bands joint tour with the Red Hot Chilly Peppers A tale of love, and began talking to the band members. Thus lust and murder between a man, a woman and her mother was narrated through the board by a singular voice named “Goliath,” who apparently began asking the band what they had to offer and making threats. After the tour, as the band prepared writing their new material, lead singer Bixler-Zavala underwent foot surgery, Rodríguez-López’s home recording studio flooded, whole demo tracks disappeared, and the album’s original engineer had a nervous breakdown. Ultimately the band blamed, all of the misfortune, that was casted upon them on the Ouija board, and decided to bury it in the desert. Geez, talk about wacky stuff.

The whole background, no matter how preposterous it might seem, made excellent material for the experimental nature of The Mars Volta and encouraged them to endeavor into even greater progressive and experimental leaps. The general vibe of Bedlam can be summarized with one word: funk, this is especially the result of the guest appearance, from behalf of RHCP master funk guitarist John Frusciante, who’s responsible for much of the guitar work, for the whole album. Most of the tracks on Goliath are explosive and energetic, moving through diverse areas and hooks with seamless effort and while in the past different instrumental segments were given their own time to breath, now many of the musicians solos and flourishes are layered on top of each other. This makes the album a very hard listen, especially for initiates to the band, but ironically I find this the best choice for people to get into the band.

The recored opens up with a bang, together with the sonic bomb shell of “Aberinkula,” that combinestheir, already notorious punk-acid vibe and style with middle-eastern influences, the end result being a amalgam of noise and psychedelic hooks. A mediocre track at most, but a good warm up. The band soon climbs a shift in the accelerating “Metatron,” a song that would better find its place in the soundtrack for fast paced video game or a car chase scene from a movie. “Ilyena,” together with the album’s first single “Wax Simulacra,” make Bedlam’s funkiest tracks.

“Goliath,” the 8 minute funk extravaganza, is clearly the most technical song off Bedlam, with some impressive guitar solos, layered one upon another, but also contains some astonishing vocals from behalf of Cedric Zavala, all this coupled with the impeccable production work, makes Goliath the clear leading song. Another highlight is “Ouroborus”, which can easily be considered one of the band’s best work and a testament to their prog roots; it changes dynamics rapidly and successfully, being a psychotic Latin infused track for a few minutes before submerging into a quiet bridge, before exploding back again. Or, “Conjugal Burns” which is a haunting, slow-burning track that captures a definite eerie atmosphere and is definitely a quite uneasing track.

This disc is a refreshingly streamlined, straightforward take on the band’s typically bursting at the hinges sound. It keeps much of the same timbre as the previous disc, but reveals an entire other side of the band — so much so that if this and the previous album were released as a double album it pretty much would have made sense. Mars Volta albums are never accessible, so don’t expect anything too catchy from the first listen, give it more chances and don’t listen to it with preconceived conceptions. Approach this album as a “Prog” and you’ll be dissapointed. There is a much edgier rock edge feel to must of the album and the band seems to be aiming for intensity as the key theme. Go in forgetting anything you’ve already heard by these guys, instead expecting a succession of punches to the gut.