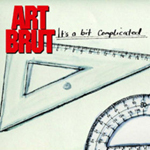 [tag]Art Brut[/tag] came like a breath of fresh air on their debut in 2005, with “Bang Bang Rock & Roll”; inspiring a sense of exuberance in the pool of over serious indie bands. The sound of their debut LP was like nothing heard before, with catchy, fun lyrics (although not the best), some may say it was a spark of genius from behalf frontman [tag]Eddie Argos[/tag]. After they learned how to form a band, discovered rock & roll with their little brother, drank Hennessy with Morrissey, Art Brut delights us with their latest alt punk record “It’s a Bit Complicated”, which i find . . . not so complicated.

The reason Art Brut was so successful is that they were so different from everyone else. Many bands after a more superficial, fun LP tend to make a more “darker”, serious second release. Art Brut isn’t the case, they haven’t changed their style a bit for “It’s a Bit Complicated”, same scrappy rock & roll and teenager like lyrics, although Eddie Argos is, generally speaking, a more measured, tender presence.These Art Brut themes are evident from the opener track “Pump Up The Volume”, with a questioning Argus, turning to his female partner and asking her “is it right or wrong, to break from your kiss to turn up a pop song?”.

“Direct Hit” is your typical summer hit, with ’80 like guitar solo riffs and with a ‘dancefloor” theme.Their punk influences can be sensed on “St. Pauli”, as Argos keeps chanting “Punk rock is nicht tot!” or punk is not dead. A, let’s say, interesting track is “Jealous Guy” (no, there’s no reference to [tag]John Lennon[/tag]’s classic) ; with the singer trying to keep his partner up so he can indulge in intercourse with her.The records real charm is it’s spontaneous humor. Argos will raise a lot of laughs with his german tentatives, binding it with English in “St. Pauli”, or explains how people in love get fat from all that lying in “People in Love”.

“It’s a Bit Complicated” is a fine sequel to Art Brut’s critic acclaimed first LP. It’s a record full of laughs and really fun to listen. It’s the typical summer record and is the perfect chill out solution !

Check out Art Brut on their myspace!