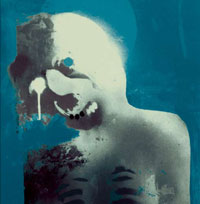 The James Lavelle fronted trip-hop group [tag]UNKLE[/tag] have released details concerning their fist single “Burn My Shadow”, extracted from their 3rd LP “War Stories”. Preorders have already been accepted by the major music shops, with the single to be delivered upon it’s release on the 25th of June.

What i find interesting and if I may a little without subtlety is it’s track name, which i find it to be a direct reference to [tag]DJ Shadow[/tag]. For those of you who have been keeping track with the electro and DJ business, you should know that DJ Shadow is the one that put UNKLE on the map. Many critics have commented that since Shadow ended his collaboration with the electro group, UNKLE’s music quality has started to dim.

As usual UNKLE has exciting and explosive videos and Burn My Shadow is no exception.

Three different version are going to be available: CD Single, 12 inch single and 7 inch single, with the last two on limited edition ( only a few hundred ).

Side A – Burn My Shadow (Album Version) (feat. Ian Astbury)
Side B – Mistress (feat. Alice Temple)