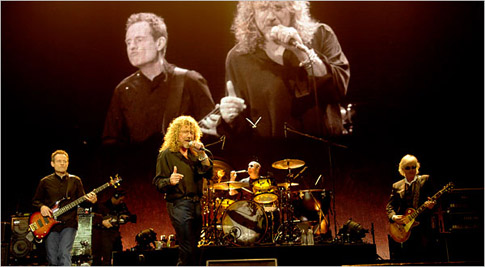 Earlier today master guitarist Jimmy Page stated for journalists in Tokyo that, after performing a show to remember at last month’s O2 benefit concert, he’s ready to take [tag]Led Zeppelin[/tag] on tour, but no sooner then September.

“The amount of work we put into O2 was what you would normally put into a world tour anyway,” Page, 64, said of the intense rehearsing the band did for the Dec. 10 concert at London‘s O2 Arena.

However Jimmy also added that because Robert Plant was busy with his solo project, fans will have to wait at least until autumn. Plant will join bluegrass country star, [tag]Alison Krauss[/tag] and begin their world tour with shows in the southern U.S. this spring. Alison Krauss will begin their world tour with a run of shows in the southern U.S. this spring. The two released an album in October called Raising Sand, that debuted at No. 2 on the Billboard chart in the U.S. and managed to hit our best of 2007 list at #26. The duo will tour Europe in May before returning for North American shows still to be announced for June and July.

Jimmy Page also told journalists that they rehearsed for almost four weeks, to make sure the show will be nothing short of spectacular, even though there was a bit of unrest among the group (Jimmy Page on guitar, John Paul Jones on bass, Robert Plant on vocals and Jason Bonham on drums, the son of the late John Bonham) that they might not manage to reach the band’s magic level of the 70’s, when they were at their peak. Fortunately all went exceptionally well.

“We wanted people who might not have even been alive in 1980 when we finished to understand what we were,” he said.

Jimmy Page also left everyone breathless, when he announced some weeks before the benefit gig, that he broke his finger in 3 place and had to postpone the show for a few more weeks. “But we did the show, and it was great,” he said. “It was instant in terms of chemistry.” John Paul Jones also hinted a while back some possible new material by the band, coupled with this upcoming Led world tour, would make 2008 a year to remember.