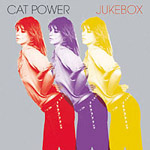 It’s a pretty well known fact Chan Marshall, aka [tag]Cat Power[/tag], is a bit eccentric in nature, to say the least, fact that can be attested by her live show attendants. But this exact eccentricity, combined with her signature weary, smoky vocals made Chan who she is today, one of the most well sought indie artists today, with over 14 years of experience. Her first cover record, the 2000 bluntly titled “The Covers Record,” became a instant hit among indie listeners and combined with her 1998 critical acclaimed Moon Pix, catapulted Marshall from anonymity to mainstream success. Now, a few more albums in and after a successful fight against alcohol and drug abuse, Cat Power is back with yet another cover compilation, in the form of the soulful “Jukebox.”

It’s pretty clear she enjoys playing other people’s songs, but few artists are as gifted as Chan, at covering songs. Although still covers, her remarkable manner and method with which Cat Power delivers them, as if they where her songs, is quite breathtaking. Radical tempo changes, key altering, a change in singing style and even modifications in lyrics, are just a few of her techniques of making a cover song, her own. Such is the case with Jukebox, in which classics, from the likes of Frank Sinatra, James Brown, Bob Dylan or Joni Mitchell, become beautifully unrecognizable.

Replacing Memphis Rythm Band, the group of musicians she’s been playing all though her last record The Greatest, for the record’s instrumentation and touring is Dirty Delta Blues Band, which includes Dirty Three’s Jim White, the Blues Explosion’s Judah Bauer and Delta 72’s Gregg Forman. With the help of musicians from the Dirty Three and the Jon Spencer Blues Explosion, their performances allow Marshall’s primal voice to take over the songs.

Jukebox’s main highlight is opener “New York, New York” (Frank Sinatra), in which she drastically alters the song’s tempo and Sinatra’s vocal cadence in such a manner, that it becomes totally unrecognizable, going from a up tempo anthem to a bluesy, soulful stump. Exactly the same stuff I’ve been talking about just earlier. “Ramblin’ (Wo)Man” (Hank Willims) is yet another cover, that’s unrecognizable from their forebears, turning William’s morning after apology into a moody ballad, with a haunting slide guitar and bluesy piano background.

Among the collection of covers, two original songs managed to squeeze in too: Moon Pix’s “Metal Heart,” now rendered with a fantastic climatic approach and “Song to Bobby,” Chan Marshall’s tribute to the great Bob Dylan, in which she relates a meeting with the great master. The record comes to a close with a rendition of Joni Mitchell’s “Blue,” performed in the same hazy and blurred environment, with a tinkling piano and an atmospheric reverb; a nice thank you for one of Chan Marshall’s biggest influences. Cat Power has yet again managed to deliver a masterful set of covers, while still experimenting with her music; something most thirty something artists dare not.