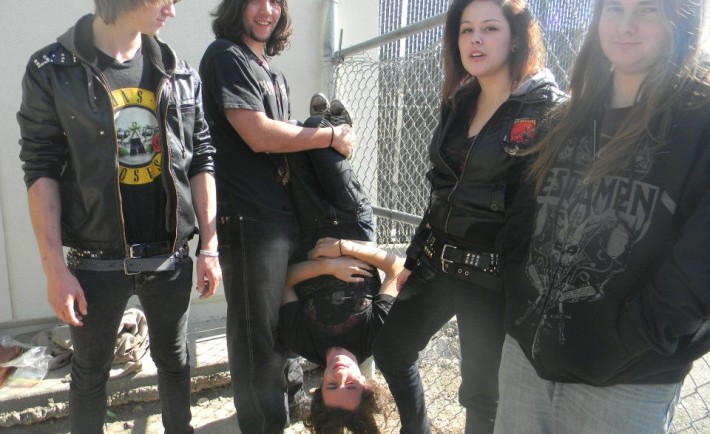 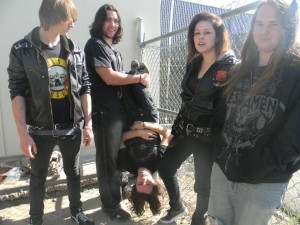 Just upstate from the birthing grounds of such great thrash pioneers as Slayer and Metallica comes Archea, a rather rambunctious young group with a definite and ferocious sound.

Coming straight out of Pleasant Hill, California, (an otherwise quiet town dwindling in the glare of the lights of San Francisco), Archea can only be described as a crazy delicious blend of metals that you won’t want to miss, and that you wouldn’t soon forget. I was lucky enough to have been able to sit down for an interview with four of the five members of this band, which is definitely up-and-coming, but coming up fast.

Interviewer (Hailie): Please introduce yourselves and your respective instruments.

Interviewer: Who are you missing?

Interviewer: Why is she not here today, do you know?

Adam: She had a really bad sickness and was in the hospital a few days ago, so…she was just kinda like, ‘it’s probably not the best idea to come here and kind of…infect everybody’.

Interviewer: Yeah…but do you guys infect people with your music?

Interviewer: Thought so!… Alright, speaking of disease, is it “arkeea” or “arkayah”, officially?

Jared: I don’t even know what Archea is… [laughs].

Kyle: We’re talking about this WAY too much…

Interviewer: What is it, for people who don’t know?

Jake: What is it?

Jake: I’ve heard it’s a bacteria found in farts or something.

Adam: Well, actually, no; that’s the original way of spelling “archaea”…the way we spell it is actually just…us.

Jake: No, the way we spell it is different than the actual spelling…

Jared: Yeah, so we’re not actually associated with farts. 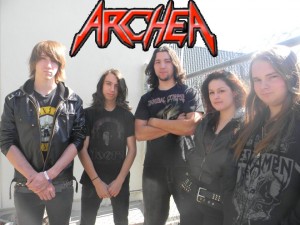 Interviewer: So, why did you choose Archea?

Adam: Uhh…we spent  like a few months looking at names, and it was either “Archea” or “Flatulent Holocaust”.

Jared: I wanted it to be “My Left Nut”, but then everyone would ask…

Interviewer: So, how’d you guys form? Was there a band before this one that kind of…

Kyle: Me and Jared were just kind of jammin’ in the garage a few times, and then we got, uhh…we got Adam and one of our ex members, who played bass for us, and then we got a THIRD guitarist, and then…

Kyle: Are we allowed to release names?

Interviewer: Yeah! …You can’t say that Brandon Malcom murdered somebody, but…

Adam: Well, our third guitarist was Will Barnett, and we had to… unfortunately, we had to go back down to two guitarists.

Kyle: And, actually, Jake was our second bassist, and he moved up to vocalist.

Jake: Yeah, I came in as a bassist; we looked for a vocalist for like, 20 years, and then I finally decided, ‘hey…I’ll try vocals’.

Adam: We had tried out people like Josh Calder  from Necrosin to be our singer, and …it just didn’t work out.

Jake: Yeah, and Brad from Eviscerated.

Kyle: Yeah, he was gonna be our singer.

Adam: Jared tried and then–

Jared: I was too good for the band.

Kyle: ‘Cause you couldn’t hear him on the P.A.

Adam:…and then we just decided, ‘let’s have Jake [try],’… then, yeah. Jake became our singer.

Jake: Yeah, I was bassist AND singer for a while, but then we decided that I sounded cooler with just vocals, so we recruited our good friend Lyssie for bass…

Interviewer: Who is not here, unfortunately…

Interviewer: Anyway, so what subgenre would you consider yourselves, if you go for that sort of thing?

Jake: We are Archea metal.

Interviewer: Why did you decide to be a metal band? Why didn’t you go for…

Kyle: Because everything else sucks balls.

Kyle: We started the whole band because of my hair. [laughs]

Adam: No, the truth is is that Kyle, Jared, and I had a lot of common likes musically… and we decided…why not?

Jared: Yeah, we all like Britney Spears, and… [laughs]

Kyle: BRING ME THE HORIZON!

Jake: I was in a band before, but… I don’t really consider what it was a ‘band’… I’m not really sure what direction it was going… It was going in like a…Disturbed/Avenged Sevenfold direction…

Interviewer: Oh yeah, I remember that…

Kyle: It was called Undropped Testicles.

Jake: That’s EXACTLY what it was called. [laughs].

Interviewer: Really? Could you…could you say that again?

Interviewer: Yell it out loud or I won’t hear you!

Adam: So, I was at the mall one time, and, basically, I saw Jake and I said, “hey, if your band doesn’t work out, come join us.”

Jake: Yeah, right in front of my old drummer…

Jake: But, um…yeah. Around when I started to hang around them, I was really into, like… AC/DC, Led Zeppelin, and the Doors… but then I slowly started getting into metal, starting with Slayer, of course…

Interviewer: That’s usually how it goes…

Jake: And then we all started to develop common likes…

Jake: I never really liked Slipknot that much…

Kyle: Yeah, you did…

Kyle: He loved Manson for like a whole month.

Interviewer: Sweet dreams are made of these.

Kyle: No they’re not.

Interviewer: Oh…Well… Anyway, what’s the coolest thing like a crowd has ever done for you?

Jake: Well, this one kid…

Jared: No, this one kid attempted to crowd surf, but he landed on his face…

Adam: Yeah, and he…um…he kicked the back of his head… He tried to crowd surf, and someone held onto his legs… so he just fell and smacked his face onto the ground and kicked himself in the back of the head, basically.

Adam: And we were just kinda sitting there, still kinda playing the song, and Jake’s like, ‘oh, are you okay, bro?’, and he didn’t really move for a bit, and we were like ‘oh, shit.’

Kyle: And I didn’t even notice.

Adam: But it was awesome, you know…He was a good guy…he got back up and kept moshing.

Jake: Yeah, even though he was about to pass out, and shit…

Jared: My dad got him water.

Adam: I think the other good thing was like when we had people singin’ along with our songs.

Jake: There was this one time at Red House where we were playing “Slow Extinction” and, like, the whole front…there was a group of kids headbanging, and in the back there was a huge pit…it was probably the coolest thing I’ve ever seen.

Kyle: Yeah, I think that was our first headlining show, wasn’t it?

Adam: Yeah, all the kids up front were just yelling the vocals the whole time, and I remember Jake was like, handing them the mic and shit.

Jake: Yeah, it was insane.

Interviewer:Let’s flip this question around… what’s the coolest thing you’ve ever done for a crowd? [laughs]

Interviewer: Let’s flip this question around…what’s the coolest thing you’ve ever done for a crowd?

Kyle: I wore a dress.

Interviewer: You wore a dress?

Adam: It would have to be at Big Four, I was in the mosh pit and I had to go to the bathroom and they wouldn’t let me out…so, I kind of unzipped my pants and ran around pissing on everyone…

Interviewer: No, I mean, as a band [laughs]That was Adam McDaniel, guys…

Jake: Adam McDaniel pisses on everyone.

Interviewer: How long have you guys been performing?

Adam: Yeah, we’re looking for more… Right now, we’re working on a demo…it should be coming out, hopefully, sometime in the next month…

Jake: I’m down for ‘Flatulent Holocaust’.

Jake: We should get Archea brands, and brand people.

Interviewer: THAT would be cool…

Interviewer: Cool, that was actually gonna be my next question…

Interviewer: Any comments about that, like…should they come? Should they break their necks headbanging?

Kyle: No! [laughs]Adam: People should come…try to come, and hangout…

Jake: Anyone who likes to rock n’ roll should come.

Adam: Umm…Well we’d like to perform at AT&T Park, the Oakland Arena, um…

Kyle: We’ll start with the Warfield.

Adam: We wanna play at the Warfield really badly…

Interviewer: Oh, yes, I forgot to ask your influences!

Kyle: Should we go as  a group, or individually?

Kyle: Our sound is a combination of Thrash/Groove Metal and, uh…

Kyle: If you listen to songs like “Slow Extinction”, it’s got the really chunky guitar, like groove metal, but, if you actually listen to it, Jake actually sounds like a crossover vocalist, so it’s a really cool mix…and every one of our songs sounds different.

Adam: We try to have as diverse shit as possible…umm…for one of our songs, we’re gonna have Jared just fart into a mic the whole time.

Interviewer: It’ll probably sound like dubstep, if you do it correctly… [laughs]

Adam: We’re gonna name it “Fuck Dubstep”, and it’s gonna be on the demo-type thing…

Jake: It’s gonna be a bonus track on the Japanese version.

Interviewer: Just have it be like a secret track and see if anyone can peg it for anything… [laughs]

Jared: Or, we could just have it be a new CD, and call it “The Misinterpretation of Silence”. [laughs]

Kyle: We spent a good amount of this interview talking about fuckin’ farts. [laughs].

Interviewer: Anything else you guys want to talk about before I hit the stop button?

Adam: We really wanna, like…start doing some house parties, and stuff… we want to see more of that out here in San Francisco…we see a lot of that in L.A., uhh…

Adam: Hopefully, this summer, we’ll be doing a tour down in L.A. and up here in San Francisco…

Jake: Yeah, along with our good buddies in Necrosin and, uh…Hemotoxin.

Adam: We just got offered to play in Oregon and Reno this summer, also.

Adam: Yeah…and other places like that, so we’re probably gonna be on tour for most of the summer…

Jake: Please stand by as we fight for food… [laughs]

Adam: We’d really like if you, um…you know, if everyone could come out and support us…

Jake: We would absolutely love that.

Adam: …on December 4 at Slim’s, so…yeah. All of you come out and party with us! There’ll be all kinds of different party supplies…

Adam: But, yeah…that’s about it.

Kyle: We appreciate it very much.

Adam: We’d love to do some more interviews with you, maybe a little more serious when, you know…one or two of us aren’t drunk or high… [laughs]

Interviewer: Yeah, especially not me…it’s bad when the interviewer is drunk AND high… [laughs] So I’ll wrap up the interview on this note: Kyle’s a good kid who never smokes, ALL of you are sober, except for me [laughs],  and you guys are gonna have a show on December 4.

Jake: We love you guys! 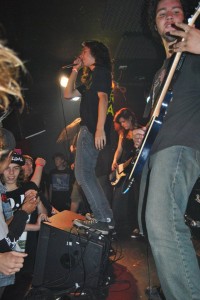 Take it from one who has been to a few of their shows and mixed it up in the pits their angsty musical concoctions create: Archea is not a band you want to miss. For tickets to their show at Slim’s , go to their Facebook page or contact the venue directly.