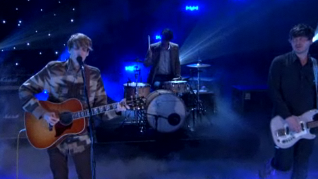 Last night Conan’s eccentric show, which featured the host wearing ladies’ jeggings and the three Kardashian sisters on the same couch, which is three too many, was topped by a sharp performance of Deerhunter’s “Helicopter” off the band’s latest full length effort, the recently released “Halcyon Digest“.

This was Deerhunter’s first national TV appearance and the band performed well on par. Check out Helicopter live on the video player below. Watch the ghostly official video for Helicopter here.