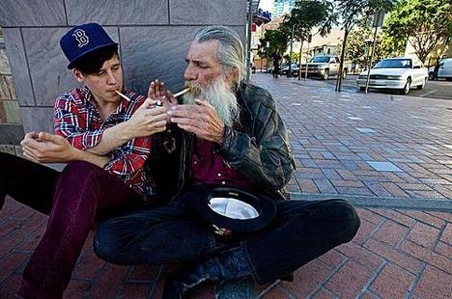 Although Nathan Williams can be safely considered a dickhead, I’ll have to grant it to the man that he’s indeed very talented, but what I really like about him is that, like most stoners, he has a well developed sense of humor and doesn’t shy away from self-deprecation. It’s enough to follow his twitter stream to get a glimpse of what I’m talking about, but besides dicking around on the web, it seem Wavves is putting the blue bird social media channel to better use lately since he released two new songs on that outlet. The first was released a week ago when he unveiled “TV Luv Song”, a fairly mediocre take in which he confesses to his most inner mindless vice (“I’m wasting away in every way / I’m wasting my time / All of my time / But that’s all right with me / I got TV.”), after which just a few hours ago he tweeted a really bomb track called “Horse Shoes”, in which he plays bass/guitar/vocals and Zach Hill is in the kit. Check out the two tracks out of Williams’ upcoming batch of self-released, fun and unconditioned songs right below. Be on the look out for a 7″, you never know.