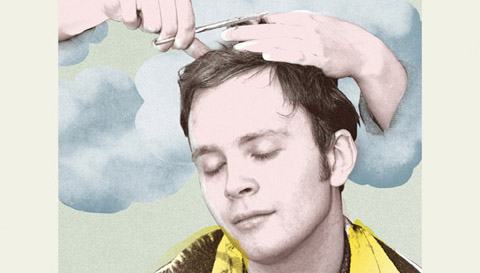 I’ve fallen head over heels for Jens Lekman‘s extraordinary music from the first song I’ve listened to, a few years back. My CD-player had the honor of spinning his 2005 debut, When I Said I Wanted to Be Your Dog, countless times and brought a lot of joy and inspiration in a lot of difficult moments in my life. Now his second record Night Falls Over Kortedala is fast approaching and as the fortunate fellow that I mean, I’ve been granted the privilege of listening to it first hand (thanks Secretely Canadian, you’re the best!). Impressing is a small word, I think dazzling or genius is the right labeling for this album, one of the best of 2007, a subject that I’ll be dealing throughly in a soon to be posted review. One of the lead tracks of Kortedala is “The Opposite of Hallelujah“, here the swedes boyish nature is at his best, with pretty and dreamy lyrics, sixties-esque piano strings or subtle violins, a perfect song to fell in love to someone on the background. Night Falls Over Kortedala is out on 10/9 worldwide.