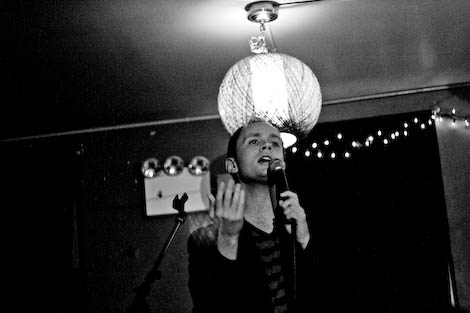 It’s just times like these that make me wish I was living in NY City. Yesterday, Jens Lekman, together with his fellow countryman, Frida Hyvonen, played an awesome set of songs down at Googie’s Lounge.

Frida Hyvonen, a somewhat obscure name, even for Brooklyn’s underground indie scene, dazzled the over-crowded audience, most probably packed together to get to see Jens. From what I heard she was really, really good, with most songs coming from her recently, November released album, titled “Silence Is Wild.”

Before she began her set, though, Jens went up the stage and performed three songs, Sipping on the Sweet Nectar, The Opposite of Hallelujah and Water Runs Dry (by Boyz II Men). Jens played Water Runs Dry really great, on a piano background line, most probably assured by Joe McGinty on keys, singing really soothing and all. A by the book performance, that’s worth a listen. [via Brooklyn Vegan]