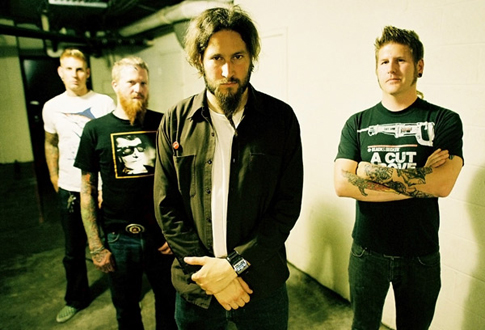 I’ve been really psyched about the new Mastodon album, especially after I’ve talked a bit about how the band’s hit the studios this week, with producer Brendan O’Brien. Since then I’ve been listening to Mastodon everyday, doing a re-run of their catalog from Remission, to Leviathan, to their last gem Blood Mountain. So you can imagine how the anticipation is building up for me and the thousands of other Mastodon fans around the world.

Anyway I’ve just learned of a bit of updates from the band’s recording sessions, down in their hometown of Atlanta. In a recent talk to billboard.com, drummer Brann Dailor tells  that so far, “everything sounds real creepy and spaced out and different.” He’s particularly enthused about a 15-minute jam dubbed “The Last Baron,” which by the sounds of it will be the album’s clear epic.

“There’s so many toys to play with over at his studio, like pipe organs and all this crazy sh*t,” says Dailor, who was introduced to O’Brien through Bruce Springsteen drummer Max Weinberg (his son is a big Mastodon fan). “There are little cool things we’re going to do to the record that we’ve been wanting to do for a long time.”

The highly talented Mastodon drummer also reveals, that the, still yet untitled, album will also follow on the same conceptual path, like the previous two Leviathan (based around water) and Blood Mountain (based around earth).

“I think a lot of people didn’t realize ‘Blood Mountain’ was a concept record,” he says. “We made up our own story again this time, but we may try to make it a little more evident that that’s what’s going on. I like to keep them speculating on our message board. There’s no possible way they could guess this.”

Besides “The Baron” other possible tracks that the new album might contain are Divinations,” which Dailor describes as “a mover and a shaker,” and “Oblivion,” which he says is “real moody.” No doubt the band are evolving, growing deeper, more conscious in their music, just like any other respectful progressive rock artists would do. Also a glimpse on a possible guest listing, is also offered as Brann points out Neurosis singer Scott Kelly might lend some vocals. Fans will get to have some first hand sampling of the new material just one week away, at this year’s edition of the Bonnaroo Festival. Meanwhile it seems I’m not the only one terribly exited about the new album.

“I have a feeling like I had before ‘Leviathan’ came out,” Dailor says. “It was like, I was feeling like we’re not that band. Everyone thinks we’re the band that did ‘Remission,’ but we’re not. We’re a new band.”