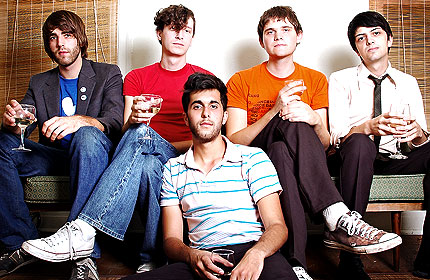 Anyone remember Voxtrot? The Austin based band gained its fair share of internet hype sometime two years ago, when they managed to release 2 surprisingly good EPs, one after the other, within a pretty short time frame. Their 2007 full length self titled wasn’t so impressive, however, and, consequently, Voxtrot kinda plunged into the shadow of anonymity.

Meanwhile, the band has been keeping to itself, with no new material out for year and with some people partying ways here and there. Things are looking good for Ramesh Maclean Srivastava, the frontman, and the rest of the gang, with a new single “Trepanation Party,” recorded with Spoon‘s Jim Eno. Seeing how we’re in SXSW week, Voxtrot are back in being town heroes.

Check out a small excerpt left by Ramesh on the band’s website, as well as an MP3 of Trepanation Party.

Things have been rather quiet round the Voxtrot camp these last two
years. Nonetheless, we are thrilled to be reentering the musical minds
of you and your loved ones. During the week of the South By Southwest
Music Festival, we will be performingtwo concerts. These will coincide
with the premier of a new song, which was produced, recorded and mixed by Jim Eno [Spoon] at his studio in Austin..

Regarding our absence, sometimes one needs to disappear in order to
regroup; situations change and human beings are swept here and there
by the marvelous ebb and flow of culture.
And so, there can be only this: a return to a love of music.