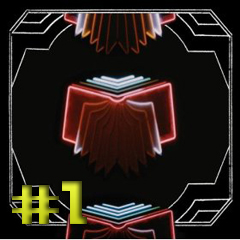 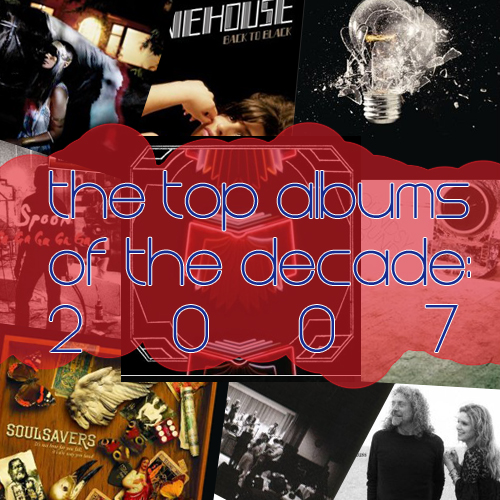 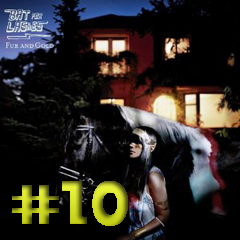 Captivating and mystic, Natasha Khan’s bristling debut “Fur & Gold” is like a never-ending fairytale crossed with the gripping, heart breaking reality. The whole album is wrapped around this aura that you wont be able to unravel before you give it  a vertiginous spin – it’s all connected to the atmosphere Fur & Gold entangles you in.  When I first sampled the record, I could only think of Labyrinth – otherwordly sounds, Natasha’s haunting voice (placed somewhere between Björk and Kate Bush), animal imagery painted in lyrics and sound, it all comes together and ultimately builds this kingdom of dreams of a record. The album’s strength is in it’s whole. You can’t skip tracks and shuffle looking for a single, although you might find something similar in the ’80s-ish eery  “What A Girl To Do” or on her cover of Bruce Springsteen’s “I’m On fire.” No, this is one of those records you need to listen head to tail to appreciate it…and then the magic unfolds.  (Tibi Puiu) 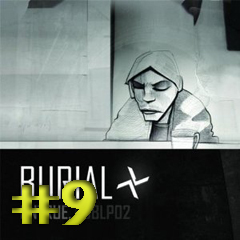 This is the only dubstep album on our top of the decade list, not only because the rest of the rather few releases from the garage sub-genre can’t even come imaginably close to the mechanical perfection of Untrue, but rather because it just may be the only influential release of an already dying genre. Twenty years from now, when critics will look down back to dubstep, the first name to pop out of their heads will probably Burial and his mystical sophomore record. Mystical from all point of views, mind you, seeing how Burial released his first two albums in complete anonymity, without sharing a word, not to mention his name, to the public. In an age where the face on a cover is more important than the music produced by the artist, this was Burial’s way of signaling a wake up call, even though he eventually unveiled his true identity after the whole issue started to become a freak show (The Sun if recall even opened up a poll in which readers were invited to guess his name – it’s William Bevan). Dark, tense, filled with obscure samples and disembodied vocals, intricate two step beats, it all comes together into a unique trip into London’s urban underground.  (Tibi Puiu) 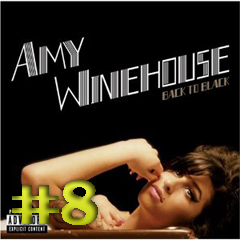 One of my favorite ‘Infographics’ on The Onion included a list of clues that Amy Winehouse is still deep in the clutches of drug addiction. After a slew of hardy-har level references to needles falling from her beehive hairdo, wokka wokka, the writer hit the nail on the head with the last sign she’s clearly still hooked on drugs: Most of her music actually sounds pretty cool. There’s no denying everyone’s favorite British Jewish tabloid fuckup her rightful place in the pantheon of twisted neo-R&B and surprisingly tasteful nods to Northern Soul and hip-hop. Nevermind that she was only 22 when she recorded most of this. To hell with Britney; leave Amy alone!  (Ty Williamson)

Soulsavers – It’s Not How Far You Fall, It’s The Way You Land (V2 Records/Columbia Records) 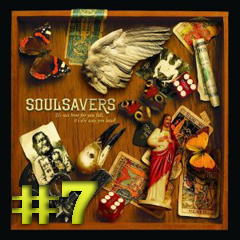 (What… that’s it? This seems lazy even for you. – Ed) That’s not enough? It perfectly captures the strengths of the album: the colliding waves of despair and hope; the beautiful soundscapes the Soulsavers conjure up; and, of course, the gravitas-lending voice of Mark Lanegan. That should be enough. (Fair point. But still, even this lazy writing device doesn’t do justice to the album. Do it properly. – Ed) Oh, fine. Even discounting “Revival”, you’ve still a got a tour de force of gothic wonder here. A bone-chilling rendition of “Spiritual”, followed by a perfect iteration of Lanegan’s old “Kingdoms of Rain”, Will Oldham joining the team for a cover of Neil Young’s “Through My Sails”, and the loneliest version of the Stones’ “No Expectations” you’ll ever hear. It’s absolutely brilliant. (That’s better. You’re still fired though. – Ed) Blast! (Al Byrne)

Kings of Leon – Because of the Times (RCA Records) 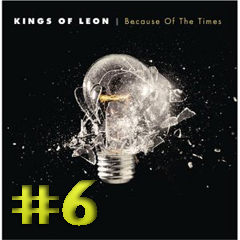 With the release of Because of the Times, Kings of Leon were starting to leave their grizzly beards and booze-and-cigarettes persona behind and were moving towards a much more clean-shaven image. Much like the fuzzy facial hair, the rollicking distorted guitars were given a tight trim, and replacing them was a wider, more radio-friendly soundscape. Granted, the much-loved ‘Charmer’ was still kicking out the jams – however, on this album they showed they could give more than your average, hackneyed-rock outfit; the mellow and rolling opener, ‘Knocked Up’, beautifully exemplified their newly acquired skills in song arrangement. It may not have the hits like the follow-up, ‘Only by the Night’, but Because of the Times is well deserved of a place in the top 10. (Conor O’Brien) 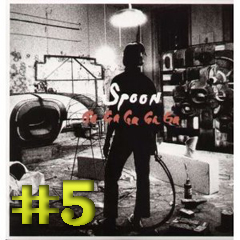 This is the album that fully restored my faith in modern music after having given up on it around mid 2005; I can’t be the only one, either. Spoon’s sixth album remains their best. It’s also the band’s most colorful. The title alone suggests as much – the title is derived from the onomatopoetic sound of the main piano riff from “The Ghost of You Lingers.” Ga offers many different flavors: There’s soul (“You Got Yr. Cherry Bomb”), funk (“Don’t You Evah”), straight-ahead indie rock (“My Little Japanese Cigarette Case”) and seductive blues rock (“Don’t Make Me a Target”). And it’s this wide palette that makes Ga so damn fascinating as a whole. Britt Daniel could’ve just made another simple, yet darling indie rock record and please the masses. But that wouldn’t be him. Instead, he put an album out containing a lead single steeped in Motown horns. The real key to the experimentation though: the band has fun. As Daniel jokingly asks Jim Eno during “Don’t,” “Can we record the talk-back?” If only every band could just dick around and make a modern classic.  (Steve Lampiris) 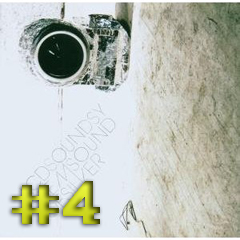 James Murphy should be given some kind of Nobel Peace Prize for his accomplishments in mass movement of the asses. I know that’s pretty high praise for someone who’s pumped out timeless dance-rock, rather than, say, traveled around the world saving children from hunger, or prevented the carpetbombing of people in the Middle East. But look at what he’s accomplished, and just try to avoid thinking about how much braincrushing work he put into banging on a keyboard to get the jangly synth lead on “All My Friends” just right. Or the perfect amount of tough love he pours into his love letter/coda “New York, I Love You But You’re Bringing Me Down,” all the while granting legitimacy to a generation of disaffected hipsters. That’s no easy task, but then again, neither is crafting a party anthem nearly as good as “North American Scum.” You’re welcome, kids. (Ty Williamson) 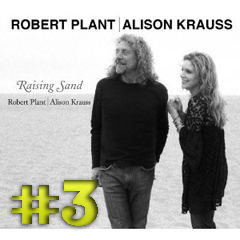 Yet more oldies come to invade the best album list for 2007. Raising Sand is a prime and rare example of two masters of their craft managing to make their collaboration sound just as good as it looks on paper – it was no surprise that it won the Grammy for Best Album. Even though Robert Plant and Alison Krauss have, collectively, spent over 60 years in the business, neither showed it on this record. Some critics even went as far as describing Plant’s vocals as “wailing” and “orgasmic” and there is certainly plenty of evidence here that he can still deliver a song with as much passion as he did when Jimmy Page was by his side. ‘Gone, Gone, Gone (Done Moved On) was the first single from Raising Sand, but undoubtedly the most charming of all was ‘Please Read the Letter’ – a Page/ Plant number that originally appeared on their 1998 album, ‘Walking into Clarksdale’. (Conor O’Brien) 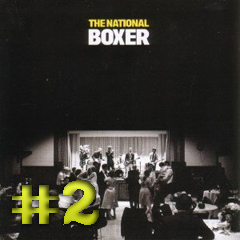 It’s a grower, that’s for sure. Really, only “Fake Empire” hits you immediately. Every other track on this spectacular collection will stand out to you at some point, whether it’s the third or thirty-third go-around. And that’s the point: The National has made one of the truly great albums of its time. Each song is goes together with all the others; not one is out of place here. The post-punk of “Brainy” goes with the shimmering guitar of “Guest Room,” which goes with the acoustic baroque of “Racing Like a Pro.” The album’s a focused work of art. You keep coming back because of one or two songs, and you stay every time for the whole experience.  (Steve Lampiris)

After Arcade Fire’s glorious debut, the glooming Funeral, all eyes were centered on the Montreal seven piece, as such Neon Bible was met with intense anticipation and high skepticism before and post it’s release date, respectively. That’s because people expected Funeral part. 2, whereas Neon Bible, although still very dark and heavy, is by no means on the same path as its predecessor. The grandious sound is still here, of course, after all it’s part of the band’s orchestral nature by now, but the pace of the songs has been slowed down a tad, leaving room for eerier and more exquisite exploration, like par say on the title track or the phenomenal “My Body is A Cage”. It’s a record aching with profound sounds, thoughtful lyrics and shockingly or not, it even has danceable vibrations, so don’t act surprised if you happen to find yourself going up and down the house when tracks like “No Cars Go” or “Keep The Car Running” set in. Brilliant and complexly arranged, this a record that needs to savoured one little piece at a time – when you finally digest its whole, you’ll be in for a marvelous treat! (Tibi Puiu)